The Star Trek 2015 Calendar is the 2015 edition of the Star Trek: The Original Series calendar series.

Led by Captain James T. Kirk (William Shatner), first officer Mr. Spock (Leonard Nimoy), and chief medical officer Dr. Leonard McCoy (DeForest Kelley), the original adventures of the U.S.S. Enterprise and the original cast is as familiar to us as members of our own families. 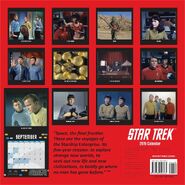 Retrieved from "https://memory-alpha.fandom.com/wiki/The_Star_Trek_Calendar_(2015)?oldid=2425023"
Community content is available under CC-BY-NC unless otherwise noted.