The Star Trek 2016 Calendar is the 2016 edition of the Star Trek: The Original Series calendar series.

Star Trek, the original series forms the core of an entire philosophy for lifelong fans and the original cast is as familiar to us as members of our own family. 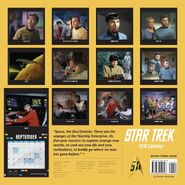 March
Add an image to this gallery

Retrieved from "https://memory-alpha.fandom.com/wiki/The_Star_Trek_Calendar_(2016)?oldid=2425019"
Community content is available under CC-BY-NC unless otherwise noted.