←
5693.2 (2268)
→
While aboard the Starfleet ship USS Defiant, Captain Kirk disappears when the dead ship gets pulled into interspace. The Enterprise is under attack by a mysterious local race, the Tholians.

The USS Defiant in interphase…

…and its lifeless bridge

The USS Enterprise searches for the USS Defiant, which vanished without a trace, in unsurveyed space three weeks earlier. They see a green glowing object, shaped like the Starship but sensors indicate that it is not there.

As the ship moves closer, Captain Kirk identifies it as the Defiant and prepares to board the ship. Kirk, Spock, McCoy, and Chekov beam over to the vessel's forward secton of its bridge in environmental suits. Once aboard, they find the ship at red alert and discover the entire bridge crew dead and the Defiant's commanding officer lying near his chair with another officer's hands on his neck, both dead.

When the party sees the ship's captain having been strangled by a crewman and the dead bridge crew, Chekov asks if there is any record of a mutiny on a Federation starship, and Spock says, "Absolutely no record of such an occurrence, ensign." When they discover there are no life signs on the vessel, the party splits up to investigate.

McCoy checks out sickbay and finds many dead crew members, some restrained to the biobeds, while Chekov finds that the life support section and engineering are littered with dead bodies. After giving his report to Kirk, Chekov suddenly becomes dizzy and loses his balance. McCoy reports that the crew of the Defiant seems to have killed each other, but he cannot determine why. According to the ship's log, the surgeon on board didn't know what was going on either. He encounters a translucent dead body and can pass his hand through both it and a table in sickbay. He determines that the Defiant is dissolving. Kirk orders McCoy to return to the Defiant's bridge immediately. As the Defiant starts to "blink" on and off, repairs are under way on the Enterprise's transporter, which Montgomery Scott reports has become "jammed up." When Kirk and and the rest of the party are ready for beam-out, only three of the landing party can go at once. Spock requests permission to remain behind, but Kirk orders him back to the Enterprise and remains behind himself.

During transport, Scott and Lieutenant O'Neil have trouble getting the three officers to materialize. The Defiant continues to blink on and off, and Scott eventually gets Chekov, Spock, and McCoy back onto the Enterprise. Kirk waits on the Defiant's bridge while the Enterprise tries to beam him aboard. The Defiant disappears and Kirk is lost with it.

Back on the bridge, Spock explains that space in this area is fractured and Kirk has slipped into another universe. He has determined that an interphase occurs for short periods during which one may travel between universes occupying the same point. In two hours, the computer calculates, another interphase will occur. However, the Enterprise must not expend any energy or the dimensional rift will be damaged and Kirk will be lost forever. During this explanation, Chekov becomes enraged and attacks Spock, who has to subdue him with a Vulcan nerve pinch. Clearly the Enterprise crew is subject to the same plague of madness that destroyed the crew of the Defiant. Spock must stay close to the space the Defiant was in in order to rescue Kirk at the right moment, or he will die, as his environment suit can provide air for only 3.62 hours.

The conversation is interrupted by the approach of a geometric, rainbow-colored ship. A Tholian commander named Loskene informs the crew that they are trespassing on territory of the Tholian Assembly and they must leave immediately. Spock says that the Enterprise is engaged in a rescue mission but Loskene points out that there is no other ship present. In the interests of "interstellar amity", Loskene agrees to wait until exactly one hour and fifty-three minutes, the time Spock has calculated until the Defiant reappears from the interspatial rift.

But when the time comes, everything goes wrong. In sickbay, an orderly attacks Dr. McCoy, who was trying to find a cause of the mental derangement. Nurse Christine Chapel administers a hypospray to subdue the orderly. The Defiant does not reappear, as the Tholian ship's use of engines in the fractured space has disrupted the timing of the interphase. McCoy reports that the sickness is not due to an infectious agent; instead, the fractures in space are damaging the Human nervous system. This conversation is interrupted when the Tholians fire upon the Enterprise. Spock mutters, "The renowned Tholian punctuality."

Spock does not wish to attack but locks phasers on target and hails the Tholians. They do not respond, and he orders Sulu to fire phasers. The Tholians stand down, but the Enterprise's power converters have been fused and the ship is adrift. Another Tholian ship appears, and the two touch aft ends briefly before separating, weaving a web between them. Spock analyzes the web and concludes that it is made of energy and "there is no analog to this structure in Federation technology." He announces that if the structure is completed before their repairs are done, the Enterprise will not see home again.

Approximately two dozen crew members assemble for Kirk's memorial service. So far, McCoy's attempts to make an antidote for the space the spaceship is in have failed, while theragen was promisingly tested so far. Spock speaks, noting Kirk's concern for his crewmembers that led him to stay aboard the Defiant. Spock repeats the sequence of events that led to Kirk's disappearance and says that the crew must accept the fact that their captain is no longer alive. One of the crew members becomes unstable at this point, screaming and yelling, and must be removed and taken to sickbay under restraint. Spock concludes that "I shall not attempt to voice the quality of the respect and admiration Captain Kirk commanded. Each of you must evaluate the loss in the privacy of your own thoughts." Scott calls the crew to order, and they observe a moment of silence.

After the crew is dismissed, McCoy forcefully reminds Spock that Kirk has left a video message in his quarters that was to be played in the event that he was declared dead, and persuades him to view the message at once. He berates the Vulcan for attacking the Tholians and reducing the Enterprise's chances of escape, accusing him of attempting to usurp Kirk's command. After their argument, they play the message, and in it Kirk asks Spock to temper logic with intuition, and if he needs help with the latter he should consult with McCoy. He also tells McCoy to remember that Spock is now the captain and that his command decisions must be followed. McCoy apologizes to Spock for his outburst and they leave to attend to their duties.

Meanwhile, Uhura is off-duty in her quarters dressed in her civilian wear. She feels a sudden pain, and when she recovers she sees an image of Kirk in his EV suit in her mirror. She runs out into a corridor and incoherently tells McCoy what she saw, but he takes her to sickbay as if she had been hallucinating. She wants to tell Spock, but she faints. In the engine room, another crewman goes berserk and attacks Scott. McCoy is attempting to synthesize an antidote that will counteract the debilitating effects of interspace. When McCoy returns to the bridge, Scott reports that he has also seen an apparition of Kirk. Scott returns to the bridge. Spock and McCoy are talking there when suddenly McCoy appears to be fainting. Spock catches him and then turns to see the image of the EV-suited captain, who appears to be trying to shout something. The captain's image then disappears.

When Uhura is released from sickbay, the crew's fortunes begin to change. Spock and Scott have calculated the next time that Kirk will appear. McCoy has found an antidote for the mental degradation with a diluted theragen derivative. Theragen, a Klingon nerve gas, while toxic in its pure form, merely acts as a powerful nerve blocker when dissolved in alcohol. Spock is understandably reluctant to take this antidote, but McCoy orders him to and tells him that it's the "Human" thing to do. Scott, on the other hand, likes it well enough to take the rest of the flask with him to see how it will taste mixed with Scotch.

At the next interphase, Kirk appears in space near the Enterprise. The ship attempts to rescue Kirk as the Tholians apply a tractor field. The energy discharge in the fractured space throws the ship clear of the web, and because Kirk is locked into the transporter beam, he is also dragged along.

McCoy and Nurse Chapel stand by in the transporter room with a hypo of tri-ox compound, as Kirk's environmental suit is beginning to run out of air and he is about to suffocate. After one unsuccessful attempt, Kirk is finally beamed back aboard the Enterprise by O'Neil and revived.

Kirk is back in uniform and sitting in the captain's chair on the bridge, and tells Spock and McCoy that after the Defiant was thrown out of the interphase, he had a whole universe to himself, but he prefers a crowded one instead. He asks them how they got along, and Spock and McCoy say that things went all right, for the most part. Kirk says he hopes his last taped orders were helpful, but Spock and McCoy lie and say that they were so busy with the crisis that they never got a chance to listen to them. Kirk gives them both a doubtful look and orders Sulu to take the Enterprise to warp factor two.

- Spock, as the Tholian ship fires on the Enterprise precisely when the allotted time is up

"I shall not attempt to voice the quality of respect and admiration which Captain Kirk commanded. Each of you must evaluate the loss in the privacy of your own thoughts."

"He was a hero in every sense of the word, yet his life was sacrificed for nothing."

"Doctor, I am in command of the Enterprise."
"I would like to remedy that situation."

"You might find that he is capable of Human insight and Human error."

"In critical moments, men sometimes see exactly what they wish to see."
"Do you suppose they're seeing Jim because they've lost confidence in you?"

- Spock and McCoy, on the sightings

"I'm sure the captain would simply have said: 'Forget it, Bones'."

"One good slug of this, and you can hit a man with phaser stun, and he'd never feel it or even know it."
"Does it make a good mix with Scotch?"
"It should."
"I'll let you know." (Scott walks out with the flask)

- McCoy and Scott, on the antidote

- Uhura, Chekov, and Sulu see Kirk through the Enterprise's viewscreen

"I must say I prefer a crowded universe much better."

- Kirk, commenting on his interspace experience

"Orders, Captain?"
"What orders are you referring to, Jim?"

- Spock and McCoy, denying that they viewed Kirk's last orders

The remastered version of "The Tholian Web" aired in many North American markets during the weekend of 31 March 2007. Some of the effects shots were virtual recreations of the original footage, whereas others were more dynamic and showed angles of both starships never before seen. The Tholian starship retained the essential design elements of the original model, but more detail and internal lights were added. The scene involving Commander Loskene was left intact and no new images of the Tholians were shown.

The original Tholian ship under fire… 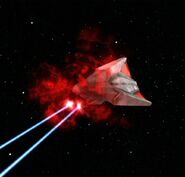 …and the remastered battle

…and the enhanced Tholian vessels

The Enterprise in the web…

Aft view of the Enterprise in the web…

The next remastered episode to air was "The Immunity Syndrome".