ISBN 179710506X (CD)
ASIN B07X8QFRV7 (Audible)
The Unsettling Stars, formerly known as Refugees and The Order of Peace, is a novel by Alan Dean Foster that was released on 14 April 2020. It was originally planned to be the first original novel based in the alternate reality established by Star Trek.

New Blurb
Taking place in an alternate timeline created when the Starship Kelvin was destroyed by a Romulan invader from the future, this bold new novel follows Captain James T. Kirk and an inexperienced crew commandeering a repaired USS Enterprise out of spacedock for a simple shakedown cruise. When a distress call comes in, the Enterprise must aid a large colony ship of alien refugees known as the Perenorean, who are under siege by an unknown enemy. But Kirk and his crew will find that the situation with the peaceful Perenorean is far more complicated than they bargained for, and the answers as to why they were attacked in the first place unfold in the most insidious of ways...

Original Blurb
From the publisher's catalog
In this new novel from the New York Times bestselling author of the Star Trek movie tie-in, Captain Kirk and the crew of the USS Enterprise must decide if a group of refugees are actually a menace – or just misunderstood.

When a strange distress call comes in and Kirk orders the Enterprise to answer it, they encounter a large colony ship of refugees under attack. Unable to convince the Dre'kalk to cease fire, Kirk engages them and drives off heir ships. The refugees – the Perenores, a race of furry bisymmetrical people – are starving, battered, and many are injured. Their ship wandered off course and their fuel and food is running out, so Kirk and the crew find a place for these displaced refugees. But just two months later, the Barran are threatening the Federation with war for protecting the Perenore menace. But Kirk and Spock are puzzled, the Perenores are peaceful people, what could have happened? 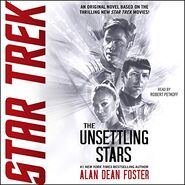 Retrieved from "https://memory-alpha.fandom.com/wiki/The_Unsettling_Stars?oldid=2513740"
Community content is available under CC-BY-NC unless otherwise noted.