Start a Wiki
"Granted, this looks like the briefing room, but these aren't the people I knew! No-one behaved like this! Well, aside from Mr. Paris."
– Backup of The Doctor, 3074 ("Living Witness")

List of The Voyager Encounter holograms created by the Kyrians. (VOY: "Living Witness")

Janeway with a "short haircut"

An evil "CHE-ko-tay" in the Kyrian Museum of Heritage

A Tuvok with "emotions"

Seven of Nine as a "Borg"

Harry Kim as a Lieutenant, not an Ensign
Add an image to this gallery
B'Elanna Torres was the ship's Transporter chief, not the Chief Engineer. Torres did not appear on screen, due to actress Roxann Dawson giving birth to her child. All holograms were played by the performers who played their real life counterparts.

Theses three warrior drones were a complement of Borg under the leadership of Seven of Nine who were part of the crew of the Warship Voyager, according to The Voyager Encounter a holographic simulation in the Museum of Kyrian Heritage, which depicted Voyager's biogenic attacks on the Kyrians at the start of the Great War.

The warrior drones neutralized a group of Kyrians who beamed into main engineering. (VOY: "Living Witness")

All three performers received no credit for their appearance. Morga is listed as "Stunt Borg" on the call sheet, the other two as "2 Borg". They filmed their scenes on Friday 30 January 1998 on Paramount Stage 9. 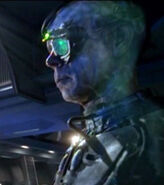 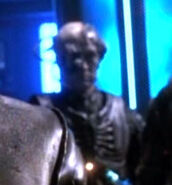 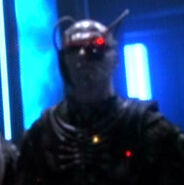 Played by John Tampoya
Add an image to this gallery

This Kazon crewmember was among the security guards serving on the bridge of the Voyager during the simulation of the attack against the Kyrian-Vaskan homeworld. (VOY: "Living Witness")

This Kazon was played by background actor Louis Ortiz who received no credit for his appearance. According to the call sheet, he filmed his scenes on Thursday 29 January 1998 on Paramount Stage 8 and is listed as "Kazon Starfleet" on the call sheet.

These Kyrians were a group of three who entered the machine room of the Voyager in the fictitious account of events. They activated Seven of Nine who assimilated them with her assimilation tubules. (VOY: "Living Witness")

These Kyrians were played by performers who received no credit for their appearance. They filmed their scenes on Friday 30 January 1998 on Paramount Stage 9 and are listed as "Kyrians" on the call sheet while Jeff Pruitt is listed as "Stunt Resistance Leader". 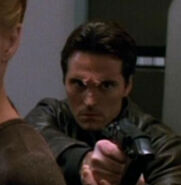 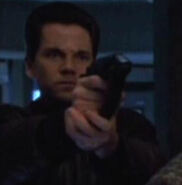 Played by R. Prince
Add an image to this gallery

This Kyrian male was being tortured for refusing to reveal the location of his leader, Tedran. Harry Kim was in charge of the interrogation, and when his beatings of the Kyrian failed to produce the information, The Doctor injected the Kyrian with a solution that caused intense pain and dissolved his brain. Chakotay promised to have The Doctor reverse the solution's effects if the Kyrian provided the information, which he did. Chakotay told Janeway that the Kyrian was very cooperative in the end. Like most of the information that was provided by the Kyrians about Voyager's involvement in the civil war with the Vaskans, this scenario was not true. (VOY: "Living Witness")

This Kyrian was played by background actor Martin Squires who received no credit for this appearance. According to the call sheet he filmed his scenes on Friday 30 January 1998 on Paramount Stage 9 and is listed as "Tortured Kyrian".

Tedran's aide was captured by Voyager and executed by Captain Janeway, along with Tedran, when he refused to reveal the location of his troops. This was what the Kyrians believed, although they were proven wrong when Quarren discovered the Voyager's EMH. (VOY: "Living Witness")

This Kyrian was played by background actress Nancy Conn who received no credit for this appearance. The call sheet is listing her as "Kyrian Dignitary" and she filmed her scenes on Monday 2 February 1998 on Paramount Stage 8.
Retrieved from "https://memory-alpha.fandom.com/wiki/The_Voyager_Encounter_holograms?oldid=2484798"
Community content is available under CC-BY-NC unless otherwise noted.