From the book jacket
Despite being an inexperienced Starfleet cadet, Sylvia Tilly became essential to the USS Discovery finding its way back home from the Mirror Universe. But how did she find that courage? From where did she get that steel? Who nurtured that spark of brilliance? The Way to the Stars recounts for fans everywhere the untold story of Tilly's past.

It's not easy being sixteen, especially when everyone expects great things from Tilly. It's even harder when her mother and father are Federation luminaries, not to mention pressing her to attend one of the best schools that the Federation has to offer. Tilly wants to achieve great things – even though she hasn't quite worked out how to do that or what it is she wants to do. But this year, everything will change for Tilly, as she is about to embark upon the adventure of a lifetime – an adventure that will take her ever closer to the stars… 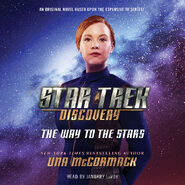