Vulcan female;
Ten Forward waitress
Theresa St. Clair is the actress who started her Star Trek connection playing the first Vulcan female aboard Deep Space 9 in the Star Trek: Deep Space Nine first season episode "The Nagus". She went on to portray recurring background characters for the following two years on Deep Space Nine, Star Trek: The Next Generation, and Star Trek: Voyager. The hair department used her as a hair model and tested and created the Emmy Award winning hairstyles on her.

As an actress she had guest parts in the television shows Cheers (starring Kirstie Alley, Kelsey Grammer, and Bebe Neuwirth), Totally Hidden Video, Baywatch, and Johnny Bago (1993). Her feature films credits include parts in the action drama Road House (1989, with Marshall R. Teague, Patricia Tallman, and Dennis Ott), the action film The Last Boy Scout (1991, with Noble Willingham and Bruce McGill), the drama The Bodyguard (1992, with Bill Cobbs and Mike Starr), and the action comedy Last Action Hero (1993, with F. Murray Abraham).

In 1992 she was one of the Benchwarmer girls and received a Benchwarmer trading card in the premier edition, card No. 16. Other Star Trek performers in this card collection include Shauna O'Brien, Kimm Collinsworth, and Sandra Wild. [1]

She also worked as a model and was featured on the covers of magazines such as Interview, Lap Top, GQ, and the French Vogue beside dozens of television commercials.

Today, St. Clair is working as a pastry chef. 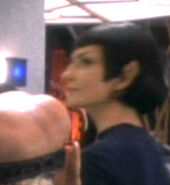