Enterprise-D officer; Klingon warrior; Security officer
Thomas J. Booth (9 July 1960 – 10 October 2006; age 46) was an actor who worked as recurring background performer on the fourth and fifth season of Star Trek: The Next Generation and also appeared in a second season episode of Star Trek: Voyager. For the episode "Redemption II", he filmed his scenes on Tuesday 16 July 1991 and Wednesday 17 July 1991 on Paramount Stage 9 and 16. [1]

Booth was a Screen Actors Guild member and also worked as an airline pilot. [2] In 1993, he appeared as a party guest in the Beverly Hills, 90210 episode "Strangers in the Night", along with Peter Mark Richman and Sarah Drury.

He passed away in 2006 due to kidney disease. He was survived by his wife Julie Harmata Booth and their three children, Tommy, Becky, and Jenna. [3](X) [4] 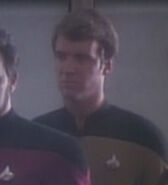 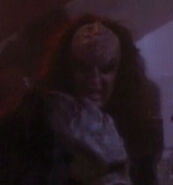