Hirogen; Alien mine guard; Orion guard
Timothy "Bubba" Sitarz (born 19 September 1967; age 54) is a stuntman and stunt actor who performed stunts in several episodes of Star Trek: Voyager and Star Trek: Enterprise. His costume as stunt double for Michael Nouri was later sold off on the It's A Wrap! sale and auction on eBay. [1]

He appeared in an episode of Walk the Prank (2018, coordinated by Michael Owen). 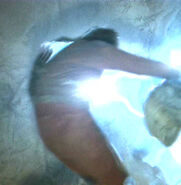