Timothy "Tim" P. Trella is a stuntman, stunt actor and stunt coordinator who performed stunts in several episodes of Star Trek: The Next Generation and in Star Trek: Insurrection. He received no credit for his television appearances. Trella was the first person ever who portrayed a Borg on The Next Generation.

Trella has also performed stunts in television series such as Tales from the Crypt (1989, with John Kassir) and CSI: Miami. 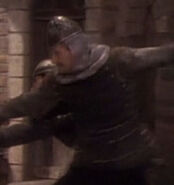