Titan was an inhabited moon of Saturn. The dense atmosphere of Titan, which was toxic for Humans, was used for exceptional starship maneuvers. (ENT: "Strange New World"; Star Trek; TNG: "Chain of Command, Part II")

In the 2140s, while on Titan as part of the Omega training mission with Captain Jonathan Archer, Trip Tucker encountered problems while on an extravehicular (EV) exercise. His EV pack froze up and he experienced nitrogen narcosis. However, Archer was able to convince Tucker not to remove his helmet while still unsheltered on Titan's surface. (ENT: "Strange New World")

In the mid-23rd century, sometime between 2234 and 2259, the Crestbrock mining collapse occurred on Titan. The AP 350 atmospheric processor saw its first deployment during the relief efforts. (SNW: "Memento Mori")

In 2258, in the alternate reality, the crew of the USS Enterprise used the conditions on Saturn and Titan to help hide their ship from the sensors of the Narada. (Star Trek)

In the 24th century, Titan was a major navigational reference in the Saturnian system and its orbit was part of the Academy Flight Range. Nova Squadron used Titan as a rendezvous point before beginning training maneuvers during preparations for Starfleet Academy's commencement exercises in 2368. They entered Titan's gravitational sphere, and then moved into a diamond slot formation before executing a low apogee turn around the moon in preparation for an illegal Kolvoord Starburst maneuver. (TNG: "The First Duty")

A research colony was established on Titan by Humans, consisting of habitats and a liquid hydrocarbon research base. In the post-Burn era, the colony, being fully self-sufficient, split off from Earth in circa 3089.

About a century later, there was an accident at the research base, which wiped out the tillable soil and destroyed a third of the habitats. With no long-range communications, Titan sent a ship to Earth asking for help; the ship was fired upon and destroyed by Defense Force ships. Believing that Earth had left them to die, the colonists became dilithium raiders, targeting Earth ships and grabbing what dilithium they could. In 3189, with Captain Saru of the USS Discovery acting as a mediator, the two sides agreed to a truce and began working on the terms of a deal. (DIS: "People of Earth")

Val Sasha grew up on a Titan colony where she had never seen a non-Human before. (DIS: "All Is Possible")

When the Sol system was threatened by the Dark Matter Anomaly later that year, the entire population of Titan was evacuated by the USS Mitchell. The moon was subsequently badly hit by the DMA, but Earth sent swift aid. (DIS: "Coming Home") 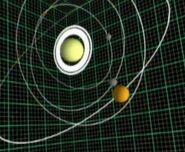 According to the Star Trek Encyclopedia (3rd ed., p. 512), Titan was the largest of Saturn's moons and had a diameter that was half of Earth's.

According to both the Pocket Books novel series Star Trek: Titan and the "Nepenthe" episode of The Ready Room aftershow, the USS Titan was named after this moon.