Titan Merchandise is a British merchandising company and retailer that is based in London, England and is a division of the Titan Entertainment Group.

Beginning in 2012, the company began to release a number of licensed eight-inch polystone "Masterpiece Collection Maxi Bust" sculptures based on Star Trek characters.

In mid-2016, a set of three-inch blind-boxed vinyl "Titans" figures and a 4.5-inch starship based on the Original Series premiered at retail as the "Where No Man Has Gone Before Collection". An "Amok Time" three-inch Kirk and Spock two-pack was also produced, alongside separately packaged 4.5-inch vinyl figures of the same two characters.

A second set of three-inch blind-boxed vinyl figures based on The Next Generation and an accompanying 4.5-inch starship were also released in 2016 as the "Make It So Collection". 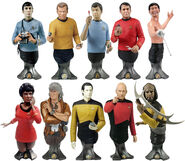