Todd E. Slayton is an actor who worked for several years on Star Trek: Deep Space Nine. He was one of Cirroc Lofton's stand-ins and appeared in several other background parts including Cardassians and Jem'Hadar, but most prominently as Thot Gor. Slayton received no credit for his appearances.

In addition, he wore a costume, originally worn by Bruce Wright as Sarish Rez in an episode of Star Trek: Voyager. His Breen costume was sold off on the It's A Wrap! sale and auction on eBay and was previously worn by Marc Alaimo. [1]

Slayton talks about wearing the Breen suits in the Star Trek: Deep Space Nine Companion (p. ?). The reference book also noted that Slayton and fellow photo doubles John Lendale Bennett, Jennifer Berlant, and Steve Wilson filled in for the actors while shooting on location in the desert of Palmdale in California for the seventh season episode "Shadows and Symbols". 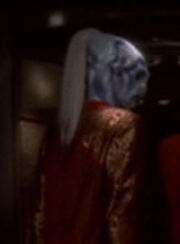 Alien in corridor
DS9: "Behind the Lines"
(uncredited) 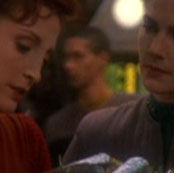 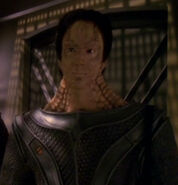 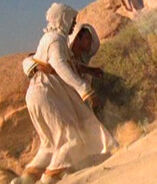 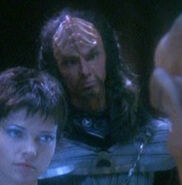