Wounded Rutian; Terril
Anthony "Tony" Cecere is a former stuntman and stunt coordinator who performed stunts in Star Trek II: The Wrath of Khan and in episodes of Star Trek: The Next Generation and Star Trek: Voyager.

For the Voyager fourth season episode "Random Thoughts", Cecere filmed his scenes on Thursday 4 September 1997 on Paramount Stage 16. According to the call sheet, he filmed his stunt scenes for "Renaissance Man" on Friday 16 March 2001 on Paramount Stage 16 along with fellow stunt performers Lynn Salvatori and Ron Althoff. His costume from this episode was later sold off on the It's A Wrap! sale and auction on eBay and was also worn by actor Jay Leggett. [1]

He was a stuntman for Rescue 911, hosted by William Shatner, and later for J.J. Abrams's series Alias. Additionally, he was the stunt coordinator for Wes Craven's A Nightmare on Elm Street, Scream, and Scream 2, as well as the 2003 remake of The Texas Chainsaw Massacre. Cecere also had a stunt acting role in the science fiction film The Return of Swamp Thing (1989), for which he also served as stunt coordinator.

Among his more recent work was stunt work on the action comedy D.E.B.S. (2004, with stunts by Monica Staggs and Boni Yanagisawa under stunt coordination by Lynn Salvatori), the science fiction film Transformers (2007, stunt coordination by Kenny Bates), and the fantasy/horror film Legion (2010, with Jeanette Miller, Doug Jones, Denney Pierce, Chuck Hicks, and co-stunt coordination by Merritt Yohnka and Marcus Young). 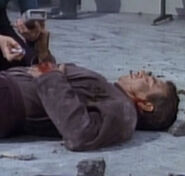 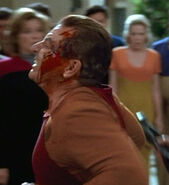 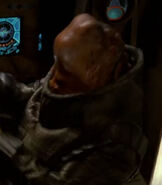 Retrieved from "https://memory-alpha.fandom.com/wiki/Tony_Cecere?oldid=2699895"
Community content is available under CC-BY-NC unless otherwise noted.