Torpedo launcher or torpedo bank was a common term for systems that deployed projectiles such as torpedoes and probes. Polities known to have used such devices include the Cardassian Union, the Dominion, the Klingon Empire, the Romulan Star Empire, and the United Federation of Planets. A torpedo tube was a part of a torpedo launcher. Torpedo launchers could usually be accessed by personnel from a torpedo bay. (TOS: "Arena", "Elaan of Troyius"; Star Trek II: The Wrath of Khan; TNG: "Where Silence Has Lease"; etc.) Those torpedo launchers dedicated to firing photon torpedoes were called photon launchers.

In the original configuration of Constitution-class starships, the torpedo launching structure also housed the ship's main phaser banks. On several starships, the torpedo launchers themselves doubled as directed energy weapon emitters. The Intrepid-class aft launchers had phaser banks; the Klingon K't'inga-class and the Romulan D'deridex-class forward launchers had disruptors. (TOS: "Arena"; VOY: "Dragon's Teeth"; DS9: "The Way of the Warrior", "Tears of the Prophets") In the pop-up Starfleet torpedo launchers, installed to Deep Space 9 in 2372, the torpedo tubes were surrounded by a phaser array ring. (DS9: "The Way of the Warrior", "Call to Arms")

In the original version of TNG: "Darmok", the forward torpedo launcher of the Galaxy-class USS Enterprise-D was depicted as having an integrated phaser bank as well. The effect was however replaced in the remastered release of the episode with the phaser blasts coming from the saucer section phaser array.

The United Earth Starfleet already employed spatial torpedoes and equipped the NX-class with launchers. After the introduction of photonic torpedoes, the existing launchers needed to be extensively reconfigured and integrated to the ships' power grid. (ENT: "Fight or Flight", "The Expanse")

Starships and installations of the Federation Starfleet made use of photon torpedoes and their launchers by at least 2233. By the mid-24th century, some Starfleet launchers were able to fire up to at least 5 projectiles in a single salvo and launch torpedoes in rapid fire. (TNG: "The Arsenal of Freedom", "The Survivors"; Star Trek) 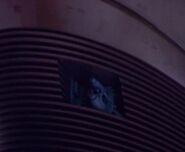 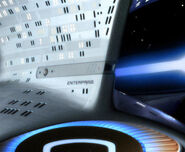 Intrepid-class USS Voyager firing aft torpedoes
According to the many MSD of Starfleet ships shown, torpedo launchers could vary greatly in size. The launchers of a Galaxy class ship for example dwarfed the ones of such classes like the Sovereign, the Defiant or the Intrepid.

In 2259 of the alternate reality, the USS Enterprise was outfitted with torpedo launchers across its secondary hull. (Star Trek Into Darkness)

The K't'inga-class was equipped with photon torpedo launchers by the 2270s when a trio of such ships made use of them in an unsuccessful strike against V'ger. (Star Trek: The Motion Picture)

It was not only on capital ships that torpedo launchers were installed; the Maquis were known to have their usually relatively small vessels equipped with launchers, including the modestly sized Maquis raider, which sported no less than four launchers, of which two were aft firing. (VOY: "Caretaker").

Encounters with the Dominion before and during the Dominion War revealed that Jem'Hadar ships were also able to launch ordnance, including torpedoes purchased from the Karemma. (DS9: "Starship Down", "Valiant")

During the Dominion War the Cardassians deployed plasma torpedo launchers aboard Cardassian orbital weapon platforms such as those encountered in the Chin'toka system. (DS9: "Tears of the Prophets")

The Star Trek: The Next Generation Technical Manual suggests that the launcher systems of the 24th century combines something similar to a light gas gun and a mass driver, as there is gas pressure chamber with launch-assist gas generators and an electromagnetic accelerator. The launcher tube is also strung with sequential field induction coils. They give a hand-off warp field to the probes and torpedoes that are powered by internal warp sustainer engines. This allows the torpedo to achieve a faster warp speed than the ship when traveling at warp. The Galaxy-class starship launchers can fire up to 10 torpedoes simultaneously from a single launch tube. (pp. 118 diagram, 129, 130)

According to Star Trek: Deep Space Nine Technical Manual, the 24th century photon and quantum torpedoes can launch without a large launcher assembly. Danube-class runabouts can be fitted with four-torpedo modules to the ships midsection that use a fire-and-forget guidance system. (p. 149)

Even though microprobes carried by the USS Voyager are canonical and the photon bursts seen in VOY: "False Profits" were identified as miniature photon torpedoes in Star Trek: Voyager - Elite Force, the existence of microtorpedoes and microtorpedo launchers has never been conclusively confirmed on-screen. All information concerning them comes from background sources and production staff interviews.

It is stated in the Star Trek: Deep Space Nine Technical Manual that some of the smaller Starfleet craft such as shuttles (p. 143), runabouts (p. 149), and even the Deep Space 9's weapon sail towers (p. 82, 83) utilize microtorpedo launchers. They are simple delivery systems, without magnetic accelerators, as microtorpedoes use a miniature fusion thruster for propulsion. Even a micro-quantum torpedo launcher is depicted on page 149.

According to Rick Sternbach there actually is a distinct microtorpedo launcher on the runabout model. [1](X)

Even though the script and dialogue called for only standard torpedoes, according to John Eaves, on the VFX teams suggestion, powerful microtorpedo launchers were indeed added to the rotary weapon arrays on DS9. The model and effects seem to confirm six round torpedo tubes on each rotary array. Extremely small compared to the larger regular torpedo tubes on the other weapon arrays. [2](X)