The Treaty of Armens was established between the Sheliak Corporate and the United Federation of Planets. It contained half a million words and took 372 Federation legal experts to draft. The treaty ceded several class H planets from the Federation to the Sheliak.

A Federation colony of Humans was established on planet Tau Cygna V in the 2270s, despite that planet having been ceded to the Sheliak. In 2366 the Sheliak demanded the colony be removed, intending to settle the planet themselves. If that was not done, they intended to "eradicate the Human infestation".

When the colony was discovered to be much larger than anticipated with a population of 15,253, Captain Jean-Luc Picard tried to negotiate a three week delay so the colonists could be removed. When the Sheliak refused to compromise, Picard resorted to using a clause in the treaty which gave him the right to ask for third-party arbitration of the dispute. As the petitioner had the right to choose the adjudicator, he selected the Grizzelas, a species who at the time were six months away from awakening from their hibernation cycle. Stunned at being outmaneuvered by the Federation, the Sheliak agreed to the original three week proposal. (TNG: "The Ensigns of Command")

The treaty was presumably established before 2255, as prior to the Tau Cygna V incident the Sheliak had not contacted the Federation. 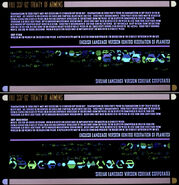 The text of the treaty as it appears on-screen is only clearly visible within the high-definition and Blu-ray releases. The text as displayed on-screen in many cases does not appear to be the text of the treaty itself, but instead background information or gags such as "You might think that this is incredibly clever stuff. Boy are you wrong." and "Rick is initially getting a Kei and Yuri reference into the text. You know, the two cute girls with the big guns. We might also mention Akira, Ranma Nibunnoichi, Urusei Yatsura, Rhea Call Force and a few other animated films. The Federation at this point seems more tangled up in paperwork than the Iran-Contra scandal business. We can do search-and-replace. Come to think about it, that's what the Shellac [sic] want do with the colony on the planet. This section deals with the right of each party to confer with the other in the event that something screwy happens with the treaty."