Multiple aliens
Trey King is an actor who appeared as a background actor in episodes of Star Trek: Voyager and Star Trek: Enterprise as well as Star Trek: Insurrection.

His costume and his special effects Suliban scalp from the ENT first season episode "Detained" were sold off on the It's A Wrap! sale and auction on eBay. [1] [2] King filmed his scenes for the episode "Non Sequitur" on Friday 21 July 1995 on Paramount Stage 16. For "Detained", he filmed his scenes on Friday 8 February 2002 and Tuesday 12 February 2002 on Paramount Stage 9.

King studied acting under Bobbie Chance, Tracy Roberts, Estelle Harman Actors Workshop, and the Screen Actors Guild Conservatory and has appeared in several commercials and stage plays such as "I'm Not Rappaport", "The Foreigner", and "The Midnight Court" in California. 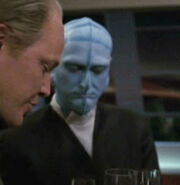 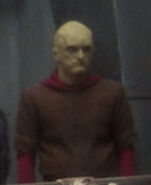