Trillions of Trilligs is a Star Trek children's pop-up book.

The USS Enterprise approaches the planet Ynobe II and receives a distress call telling them that the Trillig robots are taking over the planet. Kirk, Scotty, and Spock beam down to the planet and are captured by the robots. They are taken to the robot factory and presented to the Mad Robot Maker. Scotty and Spock take out their phasers and fire at the Robot-Making Machine, destroying it. The Trillig robots fall to the floor. Kirk takes the Mad Robot Maker to a satellite and imprisons him for one Ynobe year, and the Enterprise continues on its mission.

This eight page pop-up book was the second (and last) Star Trek pop-up book released by Random House. It contained four pop-ups, each with a page of story opposite. 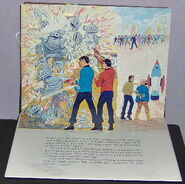 The final popup
Add an image to this gallery

Retrieved from "https://memory-alpha.fandom.com/wiki/Trillions_of_Trilligs?oldid=2432023"
Community content is available under CC-BY-NC unless otherwise noted.