A truck was a large, powerful type of general-purpose automobile built for carrying heavy loads, commonly used on Earth during the 20th and 21st centuries. They typically had a forward cab and engine compartment with a rear open box or cargo box used for carrying loads.

Edith Keeler was killed in 1930 when she was struck by a truck while crossing a street. (TOS: "The City on the Edge of Forever")

Gillian Taylor owned a Chevrolet truck which she used to travel to and from work. She also used it to pick up James T. Kirk and Spock as they walked from the Cetacean Institute to Golden Gate Park in 1986. (Star Trek IV: The Voyage Home)

Tom Paris and Tuvok "borrowed" a Dodge Ram from a car dealership so that they could travel around around Los Angeles, on Earth, in the year 1996. The vehicle was disintegrated outside the Griffith Observatory by H. Dunbar using a weapon from the future. (VOY: "Future's End")

H. Dunbar used a semi-truck to transport what the crew of the USS Voyager thought was the timeship Aeon to a location in the California desert, thought to be the ship's launch site. (VOY: "Future's End, Part II")

Jonathan Archer also stole a Dodge Ram when he and T'Pol visited Detroit, on Earth, in the year 2004. (ENT: "Carpenter Street")

In April 2024, when Seven of Nine and Raffaela Musiker stole a police vehicle to locate Cristóbal Rios; at one point, Raffaela was trying to get Seven's attention to the fact that she was driving directly toward a truck, and she was scared they were about to collide into it. (PIC: "Watcher")

In September of that same year, during the aftermath of the Bell Riots, a few large trucks were seen leaving the Sanctuary District in San Francisco. (DS9: "Past Tense, Part II")

About a generation after 2057, it started to become common to cover trucks with solar panels. (DIS: "An Obol for Charon")

Sometime prior to that however, in 2063; there were at least two trucks parked at the launch site of the Phoenix in Bozeman, Montana. (Star Trek: First Contact)

In 2152, when Malcolm Reed was about to watch The Wages of Fear on movie night, he thought two and a half hours seemed pretty long for a movie about four men in a truck. (ENT: "Vox Sola")

In 2258 of the alternate reality, when Spock met his older self on Earth, mistaking him for his father, a truck drove by the shuttle they were standing next to. (Star Trek)

In 2259, in the alternate reality, Spock pursued Khan through San Francisco, and the two of them battle on a garbage barge, which is basically a truck capable of flight. (Star Trek Into Darkness)

That same year in the prime reality, there was a truck shown on a news viewscreen in a public space on Kiley 279. (SNW: "Strange New Worlds")

In 2268 on Sigma Iotia II, an Iotian woman that lived in the Northside Territory complained to Kalo about how a truck hadn't come by to pick up their laundry in three weeks. Her complaint was ignored. (TOS: "A Piece of the Action")

In 2369, the Prophets gave Benjamin Sisko a vision using a memory he had of a baseball game. There was a pickup truck parked next to cars and a bus near the baseball field. (DS9: "Emissary")

Some trucks were capable of hovering. In 2383, the class D loader was a vehicle of this type that was used on Tars Lamora. (PRO: "Lost and Found") 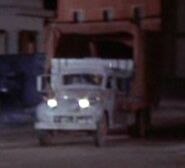 The truck that killed Edith Keeler, 1930 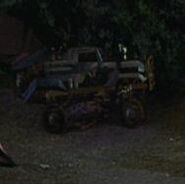 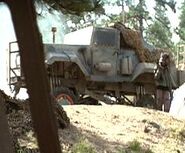 A truck with tractor treads and snowplow, 2153

A truck driving in front of Spock in 2258 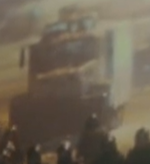