unknown (2267 – 2268)
It wasn't often that Captain James T. Kirk, commander of the starship Enterprise, had to prepare his vessel for the reception of V.I.P visitors...

Captain Kirk and Mr. Spock make an inspection of officers en route to the transporter room in preparation for the arrival of Ambassador Courtenay Marshall of the Federation Council. The ambassador beams aboard with perfect timing, and suggests that Kirk respectfully refer to him as "Excellency". He informs Kirk that he will be using the captain's quarters and requires a station prepared for him on the bridge. Kirk points out that having civilians on the bridge is prohibited under eighteen Federation regulations, and Marshall angrily retorts that Kirk is to obey his orders without question. Countering, Kirk asks for orders in writing, which Marshall grudgingly produces.

On the bridge, Kirk orders a course set for planet Tondus. It is a strategic world near the Romulan Empire, and Marshall is to negotiate for Tondus to join the Federation, thereby gaining a tactical advantage for the Federation. Marshall orders that a ceremonial guard of officers be provided to escort him to negotiations. Kirk assembles Spock, Chekov, and Sulu in the Quiet Room to practice formation. Chekov complains, protesting that they are being treated like army recruits, and Kirk rebukes him, explaining that he does not like it either, but they are required to adhere to supreme orders. Scotty interrupts the drill, alerting the captain that the Enterprise is under attack, but the ambassador has given orders not to raise shields.

Kirk dashes to the bridge, demanding that the shields be raised. Marshall says that the Tondusian ship is merely suspicious of their approach, and they should show no sign of hostility. After the ship is hit in a critical area, Kirk orders shields raised and retaliatory fire. The attacker retreats, and Marshall dismisses it as a misunderstanding, directing his entourage to accompany him to Tondus immediately. They assemble in the transporter room, and Kirk cautiously suggests that they beam down fully armed. The ambassador furiously threatens to relieve Kirk of command if there are any further arguments against his methods.

As the landing party materializes on Tondus, an officer greets them, requesting their papers. They are escorted to the reception chambers of the Tondusian Premier. The ambassador and the premier exchange cordial greetings. Kirk interjects that there was difficulty in contacting Tondus to announce their arrival, as they had been attacked. Marshall is indignant that Kirk should be so bold as to say anything, but the premier takes Kirk's words seriously. He orders his chamberlain to make a full investigation of all spacecraft activity in the last four hours.

Marshall and the premier commence diplomatic discussions, and the chief of staff takes Kirk and his men on a tour of the capital city. Privately, Kirk ponders misgivings. Meanwhile, the premier and the ambassador raise glasses in a toast – to the might of the Romulan Empire.

The chief of staff shows the landing party a mass-transit system of transporters, and makes small talk with Kirk, recognizing that Tondus could be used as a bulwark against the Romulans. Back at the "negotiations", the ambassador congratulates the premier on the appearance of normality he has preserved in the city. The premier explains that the Tondusians do as they are told. Their leaders issue the orders that are dictated to them, since their families are being held under arrest.

At the end of their tour, Kirk and his men are led into a large building. The door seals shut behind them, and they are borne along on a conveyor belt. They pass a large viewscreen with the grinning face of the chief of staff. When the conveyor stops, they see a tattered old man in chains who introduces himself: Ambassador Courtenay Marshall.

Marshall reveals that the ambassador they had known was an impostor. When the real Marshall transported to the Enterprise, his beam was intercepted, and his signal was replaced with that of the impostor. Kirk doesn't understand why the ambassador was kidnapped, as the Federation only wanted to establish an alliance with Tondus. The chief of staff then reappears, complete with armed guards, announcing that Romulans have already occupied Tondus, and the planet is under their control.

Kirk and his men are taken to the "transformation center", and the chief of staff, or more properly, the consul, tells his men to alert the president. The consul informs Kirk that they are plotting to take over Federation headquarters using Kirk and his men as tools. The president arrives, explaining that the Enterprise is to return to Earth with a fleet of Tondusian ships, apparently on a peace mission, though they will instead be used to attack. He says that the transformation machinery will provide the Romulans with a new command crew for the Enterprise. Spock perceives that they are all in great danger and attacks the Romulan guards, but the president throws a switch, jolting Kirk and his men with a massive shock, rendering them unconscious. They are then and strapped down to procedure tables. The president revels in his plan to wipe out the faces and intelligences of the men, transferring them to Romulan operatives.

On the Enterprise, Scotty, in command, is growing concerned that the landing party has not yet checked in. Just then, Uhura receives a scrambled transmission from Earth. Intelligence reports that Ambassador Marshall has been replaced with an impostor. The official displays a photograph of Marshall, and Scotty realizes that Intelligence is correct. Scotty tries to contact Kirk using a low-pitch communicator signal, but the captain is still unconscious.

The president prepares his willing men for the transformation procedure, describing the process. Their personalities and physical characteristics will be removed by dematerialization, and they will be given the minds, bodies, and memories of Kirk, Spock, Sulu and Chekov. Though thinking, talking, and acting as their templates do, they will still be loyal Romulan agents. Through the captain's open comm link, Scotty hears everything.

Scotty sounds a red alert, assembling a four-shuttle strike force full of heavily armed officers. As the transformation process begins on the Romulan volunteers, Kirk and his men regain consciousness. The President taunts Kirk with his plans of domination, but a Romulan officer suddenly reports that four armed craft from the Enterprise are approaching fast. Bewildered by how his plans could have been discovered, the president orders a full defense alert, adamant that his plans will still succeed. In the stratosphere above the capital, Tondusian ships intercept the shuttles and engage them in a firefight.

With the Romulans distracted, Kirk is able to contact Scotty, informing him the Tondusian leaders' families are being held hostage. He directs that the strike force be divided, with one group heading for the government building, and the other to the prison. The shuttles are able to overcome and destroy the Tondusian defenses, and the impostors start to panic. Knowing that they will be executed for failure, the President and the fake Ambassador plot to blow up the building with everyone inside. Before they can activate the auto-destruct controls, Scotty and his men burst in, stunning the Romulans with phaser rifles. The men free their crewmates, and Scotty reports that the Tondusians and the prisoners are now free.

"It's happened before that men have been sent to their deaths by the orders of a fool with a headful of nothing!"

- Sulu, disapproving of the ambassador

"Masterly! But then we are masters, aren't we!"
"Naturally. We're Romulans."

"You can't get us to help your treacherous schemes. We're all trained to resist mind domination!"

- Kirk, despite having been brainwashed on more than one occasion

"There's no time for finesse, sir! We must attack!"

"Out of the way, you snivelling [sic] curs! Make way for your masters!"
"Haw! There's no fight in these spineless jackals!"

None of the UK weekly stories had titles. Each installment was two pages in length. The entire story was published in black and white, a first for the weekly UK story arcs. 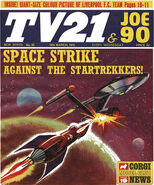 TV21 & Joe 90 #25: "SPACE STRIKE AGAINST THE STARTREKKERS!" – A Tondusian ship targets the Enterprise

Retrieved from "https://memory-alpha.fandom.com/wiki/Twelfth_UK_Story_Arc?oldid=2531034"
Community content is available under CC-BY-NC unless otherwise noted.