Configurations for 1 or 2 pilots, plus at least 1 passenger

The Type 15 shuttlepod was a Federation shuttlepod carried by Starfleet vessels, a small version of Starfleet's larger shuttlecraft.

Type 15 shuttlepods were introduced sometime prior to 2365. They were part of the standard shuttle complement on Galaxy-class, Renaissance-class, Oberth-class, and Nebula-class starships. (TNG: "Time Squared", "Identity Crisis", "Hero Worship"; DS9: "Second Sight") They remained in use until at least 2381. (LD: "We'll Always Have Tom Paris")

According to the Star Trek: Voyager Technical Manual (p. 20), USS Voyager normally carried four of the smaller shuttlepods of this type, however this idea never came to fruition.

The impulse nacelles, which were located on either side of the craft, were fed by both a primary and secondary deuterium supply, and power was provided by three sarium krellide cells. (TNG: "In Theory") The magnetic inducers required periodic realignment. (TNG: "Transfigurations")

They did not have warp capability. (TNG: "Time Squared", "The Mind's Eye")

The fact that "shuttlepods are incapable of warp speed" was additionally noted in the Star Trek: Voyager Technical Manual (p. 20)

Without either primary or reserve power, the shuttle's systems, including it's on board system and the communications system, would not work. It was, however, capable of transmitting an automated signal. (TNG: "Time Squared") The isolinear storage assembly, which housed the isolinear chips that stored the pod's mission logs, was located in the shuttle's aft compartment. (TNG: "The Mind's Eye")

The cargo hold could also be isolated with a containment field. (TNG: "The Most Toys"; DS9: "Second Sight") They were also equipped with deflector shields. (TNG: "The Mind's Eye", "Power Play")

The normal flight crew was two pilots, although the shuttle could easily be operated by a single person. (TNG: "Time Squared") Their configuration could be modified to include only a single pilot seat. (TNG: "The Mind's Eye") As well, the partition between the cockpit and cargo hold could be removed to reveal the rear bench for additional passenger space, and were fitting with seat belts. (TNG: "Power Play")

Entry was gained through either a port or starboard ingress/egress hatch that opened with a gull wing configuration, with the lower half of the door doubling as a step. (TNG: "Time Squared", et al.) They were built with at least two emergency hatchs, a rear hatch, which could be blown away by an explosive charge. (TNG: "Power Play")

The ship also had a small cargo space, which could be used for carrying supplies. The cargo area was loaded and accessed through a hatch in the back of the craft. (TNG: "The Most Toys")

With gull wing hatch open, with view of interior and partition 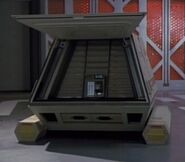 According to the Technical Manual also stated that the production base of shuttlepods was the Starbase 134 integration facility on Rigel VI, and there were in fact three different types of shuttlepods of this design:

All types of shuttlepods had the standard armament of two type 4 phasers, a fact never revealed onscreen.

The shuttlepod was designed by Rick Sternbach and Richard McKenzie under the direction of production designer Richard James; the miniature was constructed by Tony Meininger. (Star Trek Encyclopedia (3rd ed., p. 130))

It was slated for introduction in the second season episode "Time Squared" to alleviate the costs associated with building exteriors and mock-ups of the larger, more elaborate types of warp-capable passenger shuttles. These ships were also designated to carry fewer people, and had slower speeds. However, the art department had a bad experience in building the full scale mock-up of the first shuttle, the Type 7 shuttlecraft, built for TNG: "Unnatural Selection". The complicated curves of that design caused significant troubles in constructing the mock-up with regard to bending the wood enough. Some of the curves had to be built up with putty. All this resulted in a full scale exterior that was not entirely convincing and could only be shot from limited angles, since only one side was constructed. The art department was less than enthusiastic with the prospect of building yet another complicated shuttle design. Sternbach remembered "Everybody was kind of scratching their heads, and thinking that maybe we'd have to write the shuttlepod out. I cautiously went up to the front of the room with this very rough but fairly clear sketch. I said, "What if we made it fairly simple? just planar construction; no compound curves. We can make it look Starfleet; that isn't the issue. If we do something like this we can make the construction simple, but also make it interesting." They all looked at me, looked at the sketch, and said, "Ahh, OK." Then they approved it." (Star Trek: The Magazine Volume 3, Issue 2, page 112)

In a preliminary sketch from January 1989, Sternbach set the dimensions of the Type 15 at 12 feet long, 5.6 feet high, and 6 feet wide. (Star Trek: The Next Generation - The Continuing Mission, page 79)

Sternbach finalized his design in March 1989 and set designer McKenzie drew up construction plans for the full-scale mock-up which was built with relative ease, resulting in a mock-up which could be shot from all angles. The miniature studio model was built by Gregory Jein. The model was featured in the Inside the Star Trek Archives special of TNG Season 2 DVD, disc six.

A tiny miniature of a Type 15 shuttlepod was constructed by Ed Miarecki along with five matching Type 6 shuttlecraft miniatures to go with the model he made of the main shuttlebay of the USS Enterprise-D for a close up scene in "Cause and Effect". Ultimately however, in the scene as screened only two of the Type 6 shuttles were shown. [1]

By the fifth season of TNG, the shuttlepod was joined by the larger Type 6 shuttlecraft, which also had a full-scale mock-up that matched its filming miniature. The interior set of the shuttlepod was also reused in Star Trek: Deep Space Nine for the cockpit of the Federation attack fighters in "The Maquis, Part II" and the Type 18 shuttlepod interior in "The Search, Part I", "The Search, Part II" and "Destiny". (Star Trek Encyclopedia (3rd ed., p. 444)) The mock-up was demolished after the series wrapped. (citation needed • edit)

A set of seven of Sternbach's design sketches was offered in the The Ultimate Sci-Fi Auction of 26 April 2003. [2] As of 2009, the studio model miniature, having escaped the 40 Years of Star Trek: The Collection and It's A Wrap! sale and auction auctions, is still in the possession of Paramount Pictures, having been on tour displays such as Star Trek World Tour, Star Trek: The Exhibition, and Star Trek: The Adventure as late as 2008, labeled "09" though otherwise unnamed.