Eight settings, including stun and kill

23rd and 24th centuries
A type-1 phaser was the smallest, most basic weapon carried by Starfleet and other Federation personnel. Type 1 phasers were typically carried when it would be inappropriate to carry a larger weapon, such as on diplomatic missions, or "undercover" work.

The type 1 had eight adjustable settings, ranging from stun to heat through disruption to disintegration. The 23rd-century type 1 in use in the 2260s incorporated a small flip-up sight. (TOS: "A Private Little War") Several versions of the type 2 phaser incorporated a type 1 phaser into their design.

A 23rd century type 1 phaser did not possess sufficient power to harm a silicon-based lifeform such as a Horta. (TOS: "The Devil in the Dark")

24th century type-1s could be programmed to fire automatically at set intervals. (TNG: "The Game")

A phaser pistol incorporating a type-1 phaser circa the 2260s 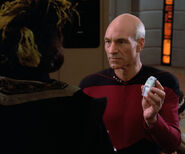 The Star Trek: The Original Series type 1 phaser, as the designation was first identified on screen in TOS: "The Devil in the Dark", was designed by Matt Jefferies and John Jefferies with input from Gene Roddenberry, and was built (or the construction supervised by him at the Desilu prop shop) by Matt Jefferies, and later modified by Wah Chang at Gene Roddenberry's request. It is a common misconception that Chang, the builder of both the tricorders and communicators, also built the phasers. Roddenberry was unhappy with how the black and white phasers registered on screen and so asked Chang to give them a new paint scheme and add some detail. The new grey paint scheme and details on the "hero" phasers were seen in the episode "Dagger of the Mind". This is based on interviews with Jefferies' brother and an interview by propmaster Alan Sims (HMS) with Chang and backed up by copies of the invoices Chang submitted to Desilu for his work of "refurbishing" the phasers.

On Sunday, 27 September 2009, the Art Directors Guild Film Society presented a panel discussion titled "Star Trek: 45 Years of Designing the Future" in which the participants were John Jefferies, Joseph R. Jennings, Herman Zimmerman, and Scott Chambliss. During this panel discussion, John Jefferies said that the design of the TOS phaser was a joint effort between himself, his brother Matt Jefferies, and Gene Roddenberry. According to John Jefferies, he was hired to work on the design of the phaser as an independent contractor, since he was still working for Columbia Pictures at the time, and hence was not part of the regular Star Trek Art Department. After discussing design ideas with Matt Jefferies and Gene Roddenberry, John drew five drawings of possible designs for the phaser. About a week later, he showed the drawings to Matt Jefferies and Gene Roddenberry. They chose elements from each of the drawings and asked him to combine them into one, which ended up being the design of the first phaser prop. John Jefferies also mentioned that the basic shape of the hand phaser was inspired by a remote control that Magnovox had recently released.

The sight is not immediately apparent in most episodes, but a detailed physical examination of one of the surviving "hero" phasers has documented its presence, as well as the location of the trigger. (TOS Season 3, Disc 7 "A Star Trek Collector's Dream Come True") (Star Trek: Communicator(citation needed • edit))

In Star Trek: The Animated Series, type-1 phasers were seen with their coloring reversed: They were silver/grey with black trimming.

The Next Generation type-1 phaser was shown as having a completed design in a series of sketches which were dated 6 February 1987 and which Andrew Probert prepared for construction bidders interested in building the props required for the show. (Star Trek: The Next Generation Companion (3rd ed., p. 11)) The TNG type-1 phaser was, however, designed by Rick Sternbach. A design patent was issued for Sternbach's design wherein he was identified as its "inventor". Nicknamed the "Cricket", the type-1 was rarely used after the first season of The Next Generation because Gene Roddenberry felt it was so minuscule that it was hardly visible on screen. (Star Trek: The Next Generation - The Continuing Mission) Nonetheless, it later appeared in "A Matter Of Honor", "The Mind's Eye", "The Game", and "In the Flesh".

Retrieved from "https://memory-alpha.fandom.com/wiki/Type_1_phaser?oldid=2690541"
Community content is available under CC-BY-NC unless otherwise noted.