22nd, 23rd, and 24th centuries
A type-2 phaser or phaser pistol was a typical handheld directed-energy phaser sidearm used by Starfleet and United Federation of Planets personnel during the 23rd, 24th, and 29th centuries.

More powerful and generally larger in size than the type 1 phaser, type 2 phasers were kept aboard Starfleet and Federation starships, starbases, space stations, and at planetary facilities.

A descendant of the EM weapons and phase-pistols of the 22nd century, the type 2 phaser was introduced before the mid-23rd century and was standard issue aboard Starfleet vessels by the 2260s. Since their introduction to Starfleet personnel, several models and makes have been produced.

Utilized primarily in defensive situations, the phaser type-2 had several applications, from use as a weapon to use as a cutting tool, explosive device, or energy source. Storing considerable energy, most phasers were distinguished by a roughly pistol or gun-type configuration, firing a focused energy discharge in the form of a beam or steady stream. (TOS: "The Naked Time", "The Conscience of the King", "The Galileo Seven")

In the early 2160s, prior to the invention of the phaser weapon, and following the formation of the Federation, phase pistols were discontinued and a new weapon was used by Starfleet. (Star Trek Beyond)

The type 2 phaser was also preceded by laser pistols, which were in use by Starfleet in 2254. (TOS: "The Cage") By 2256, they were replaced in frontline use by phasers. (Star Trek: Discovery)

The use of lasers before phasers, established in initial TOS pilot "The Cage", is often regarded as an anachronism.

As early as the 2260s, Federation type 2 phasers were characterized by an unmistakably gun-like appearance. Varying in color from black and white, gray and black, and gray and copper combination, the 2260s model featured identifiable barrel and trigger structures, with an elongated handle/power pack capable of being quickly swapped out and "reloaded".

Unlike the majority of its progeny, the type-2 phaser of the 2260s – and later the 2280s – featured an integrated companion, top-mounted type-1 hand phaser. (TOS: "The Devil in the Dark", "The Omega Glory") A type 2 phaser of the late 2260s was capable of firing an energy beam with a heat emission of eight thousand degrees centigrade. (TOS: "That Which Survives")

Type-2 phasers of this period were, like later models, capable of power adjustment. Beam intensity and even speed and motion could be altered, depending on the intended function. They could be utilized to produce a cutting beam, capable of slicing through a bulkhead, or to generate a phaser "spread". The energy from a 2260s model could also be drained (a process which took several hours) and used as a power source. The energy from six phasers was capable of launching a small vessel or shuttlecraft into an unsustainable orbit around a planet for several hours. Adjustments could be made by a small knob at the rear of the device, and one on the front of the left side. (TOS: "The Naked Time", "Wink of an Eye", "The Galileo Seven"; ENT: "In a Mirror, Darkly, Part II"). When overloaded, a 2260s type 2 phaser had the capacity to destroy a significant portion of a starship. (TOS: "The Conscience of the King")

The destructive power of the type-2 phaser of this era has been measured in thousands of lives, when large numbers of Yangs were killed on the planet Omega IV in 2268. Proconsul Claudius Marcus, of planet 892-IV's equivalent of the Roman Empire, noted that 100 men armed with hand phasers could "defeat the combined armies of Rome." At its maximum setting, it could disintegrate an object up to the size of an average humanoid. Trelane once observed that, in his opinion, a Type 2 phaser "could kill millions". (TOS: "The Squire of Gothos", "The Omega Glory", "Bread and Circuses")

During the period ranging between the late 2270s and the early 2290s, at least three type-2 phaser variants were put into service aboard Federation starships and space stations.

Consisting of single-piece and phaser type-1 and type-2 combination units, most phasers of this time were characterized by a dark-gray coloration, some with a number of control buttons allowing adjustments to be made for the desired effect.

Functioning similarly to the 2260s-style type 2 phaser, the phaser-2 models of this period were powerful enough to vaporize targets up to the size of an average humanoid and could throw a stunned individual several feet in certain circumstances. (Star Trek II: The Wrath of Khan; Star Trek III: The Search for Spock)

By 2287, type 2 phasers had become sleek, black models with removable clips at the handle. They were stowed in equipment lockers aboard Federation starships and shuttlecraft, though they would trigger an alarm if fired at certain settings. A phaser of this design, fired on stun at close range, was lethal. (Star Trek V: The Final Frontier; Star Trek VI: The Undiscovered Country)

Karnas of Mordan IV displayed several weapons on a wall behind his desk in 2364. Among them were two phasers, one a Starfleet type 2 phaser. (TNG: "Too Short a Season")

Phasers of this type remained in sporadic use into the 24th century; Dirgo carried several 23rd-century type 2 phasers aboard his shuttle in 2367. (TNG: "Final Mission")

In the alternate reality created in 2233 by Nero, the alternate 2250s version of the type 2 phaser became silver, albeit with a body reminiscent of the original design, with a rotating barrel for switching between stun and kill settings. (Star Trek)

These phasers were only ever depicted firing bolts rather than continuous beams. 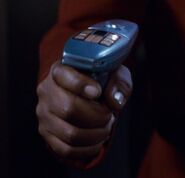 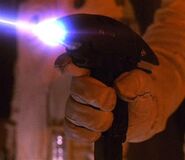 Kill and stun settings on the alternate reality phaser pistol, 2258

A phaser in 2263 of the alternate reality

24th century and beyond

By the 2360s, the type 2 phaser had evolved past the pistol-like configuration, becoming a sleek, silver-colored device with a handle flowing into the form of a muzzle cowling and emitter.

With two small buttons for beam width and intensity control and a large one to fire the device, the phaser type-2 of this period featured a large, illuminated power level readout. The phaser of this time retained the functionality of the previous designs, but increased the power and versatility. Like their predecessors, these units could be adjusted for use as cutting tools or power sources. They could also be set to overload, becoming a powerful explosive device. (TNG: "Encounter at Farpoint", "The Hunted", "Silicon Avatar")

In 16th century terms, the hologram Leonardo da Vinci warned Kathryn Janeway of the phaser he had in his possession, "Be careful! They have found a way to harness the energy of a thunderstorm and to expel it with great force. A pistol that shoots not a lead ball but a bolt of lightning." (VOY: "Concerning Flight")

In the 32nd century a 24th century type 2 phaser was seen in a scrapyard. (DIS: "Scavengers")

The type 2 phasers of the 24th century were capable of achieving sixteen settings, ranging from mild stun to disintegration. They were as follows:

In addition to variable power settings, type-2s could be set for a narrow (affecting a single target) or "wide" beam (affecting two or more targets over a certain area). The frequency of the beam may also be adjusted to make it more effective against certain types of shields and/or force fields. (TNG: "The Arsenal of Freedom", "The Best of Both Worlds", "Power Play"; VOY: "Initiations") Type 2 phasers could also cause severe to deadly phaser burns. (TNG: "Night Terrors") 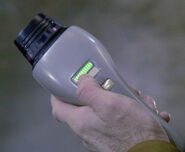 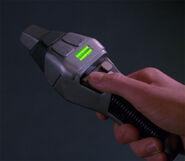 A type 2 phaser (without setting indicators) circa 2369 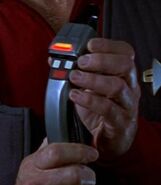 Although this type of phaser was visually introduced as early as TOS Season 1, and the first season TOS episode "The Devil in the Dark" had dialogue mentioning 'phaser 2' and 'phaser number 2', the term "type 2 phaser" was not officially associated with this weapon until the TNG sixth season episode "Aquiel" (the term was later also used in the VOY Season 3 installment "Fair Trade").

In an ultimately omitted scene extension from the script of TOS: "Court Martial", Spock gave Captain Kirk a phaser just before Kirk left the bridge of the USS Enterprise in order to search the ship for Benjamin Finney, who Spock speculated might already be armed. Though Kirk checked the phaser and started to make an adjustment on it, Spock notified him the weapon was already on the stun setting. Kirk then thanked Spock for the weapon. In the final edit of the episode, the subsequent scene shows Kirk carrying a type 2 phaser through a corridor, with no indication as to how he obtained the weapon.

Ed Miarecki has noted that the TNG type-2 from season 1 was nicknamed the "dustbuster".

As shown in the It's A Wrap! sale and auction, a number of type 2 phasers created were intended for background purposes only, and thus were made out of foam and molded directly into their holsters. One was sold in week five of the auction for US$425.00. [1] A phaser holster for this type was also sold off. [2]

In Star Trek Beyond, the barrel sides of the sidearm phasers are flat, similar to the phasers seen in Star Trek: The Motion Picture and Star Trek II: The Wrath of Khan. Also, both barrels shoot blue bolts and deal no physical damage, while the setting is instead shown by the barrel tips being colored blue and red. In addition, there is a second version of the sidearm that is bunker, completely metallic and without coloring, and without double-sided barrels.

Type 2 phasers from TNG Season 3 were also seen in the Warner Brothers movie Stay Tuned. The assault phaser from Star Trek V: The Final Frontier and Star Trek IV: The Undiscovered Country is additionally seen in the MadTV skit The Captain Kirk Show.

For TNG, the type-2 phaser was intentionally differentiated from the style used in TOS. In a 1987 interview, Rick Sternbach explained, "We've gotten away from the pistol look of the handheld phasers. We have based the new design on the fact that there are many ways for the Human hand to grip one." (Starlog issue #125, p. 48) Sternbach included a complete version of the TNG design of type-2 phaser in a series of sketches which were dated 6 February 1987 and which he prepared for construction bidders interested in building the props required for the show. (Star Trek: The Next Generation Companion (3rd ed., p. 11))

New phaser designs for TNG Season 3 were submitted by Rick Sternbach, for what is essentially a prelude to the phaser rifle, whose concept art described "phaser II extension: riot gun". Notes regarding the design included: "Fires compact plasma toroids at 50,000-150,000 m/sec muzzle velocity. Developed for use against Borgs or other forms which reflect/absorb phaser energy." (Star Trek: The Next Generation - The Continuing Mission, p. 97)

The alternate reality type 2 phaser seen in Star Trek Into Darkness was fabricated by Ken Palkow. [3]

The style of Starfleet hand phaser used in Star Trek: Discovery was based on the TOS hand phaser but was given a "tougher" appearance because the show's creative staff wanted the resultant prop to indicate a more militaristic functionality. The phasers were produced and painted in Los Angeles, California, and were 3D printed. ("Star Trek Exhibition" at DIS: "Si Vis Pacem, Para Bellum" screening, Millbank Tower, London, UK, 5 November 2017) One of these phasers was featured at Star Trek: The Exhibition in Blackpool, UK, and is now on a world tour. On 26 February 2018, the specifications for this style of type 2 phaser were revealed at the official Star Trek: Discovery Twitter account, which identified this design of phaser as the "Type Two, Mk. II". [4]

The Star Trek: The Next Generation Technical Manual describes phasers operating on a "modified version of the rapid nadion effect" which "produce a pulsed protonic charge."

The Ninth UK Story Arc suggests that the version of this phaser, in use in the 2260s, did not function when submerged in liquid.

In the novel Vendetta, it is stated that a type 2 phaser has enough power for ten shots at setting level sixteen. Also, every time the phaser is fired at level sixteen, there is an automatic six-second cool-down period; otherwise, the phaser will overheat and possibly explode.