The USS Antares and its sister ships were one of the many alternative hull configurations of the Miranda-class starship design to have appeared on screen. This variant of the class was designed by Adam Buckner. The ships were equipped with a pod module connected to the primary hull by a single pylon. The pod was made from the stand of an AMT Excelsior kit (No. 6630). [1] 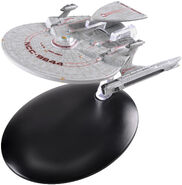 USS Antares rebuilt in CG by Fabio Passaro
Add an image to this gallery
Retrieved from "https://memory-alpha.fandom.com/wiki/USS_Antares_(NCC-9844)?oldid=2399189"
Community content is available under CC-BY-NC unless otherwise noted.