In 2365, the captain of the Aries retired, and Starfleet Command chose William T. Riker to replace the captain. At the time, the Aries was in the Vega-Omicron sector, and had recently picked up indications of an intelligent lifeform, but nothing was yet confirmed. Riker was chosen, according to Jean-Luc Picard, "not for your military proficiency, but for your skill as an explorer and as a diplomat."

At the time of the offer, the USS Enterprise-D was on a twelve-hour layover at Starbase Montgomery. During its layover, the ship received a civilian tactical advisor, Cmdr. Riker's father Kyle Riker, to brief Riker on the Aries' mission. Riker was later visited by Lieutenant Worf, who requested to join Riker aboard the Aries, if he took the posting. The first officer of the Aries was Commander Flaherty, an officer that Picard highly recommended for the mission to sector Vega-Omicron. Later, when Riker consulted Picard, Picard put the Aries mission in perspective to the Enterprise mission, describing it as "a relatively insignificant ship, in an obscure corner of the galaxy. But it will be your ship." (TNG: "The Icarus Factor")

Ultimately, Riker turned down the position, for what he described as "Motivated self-interest. Right now, the best place for me to be is here." (TNG: "The Icarus Factor") Later, when Riker told his transporter duplicate, Thomas, about turning down the offer for the Aries, Thomas inquired what their father thought of his decision, Will explained "he couldn't understand why I did it." Thomas could not understand the decision either, stating, "for once he and I agree on something." (TNG: "Second Chances")

Later that year, former USS Victory Ensign Mendez served aboard the Aries. While under the effects of an exotic virus from Tarchannen III, she stole the shuttlepod Cousteau to return to that planet. (TNG: "Identity Crisis")

In 2368, the Aries joined Captain Picard's fleet that blockaded the Klingon-Romulan border during the Klingon Civil War. The ship was one of twenty-three assembled for the fleet and was one of the seventeen chosen for the tachyon network. Identified by its name and registry number, the ship's position in the network was monitored from the Enterprise-D.

When the network was disrupted by a high-energy burst released by the Romulans, the net was no longer effective in a radius of ten million kilometers around the USS Sutherland. Subsequently, Picard ordered the fleet to proceed to Gamma Eridon at maximum warp, where the fleet would attempt to reestablish the net before the Romulans got there. (TNG: "Redemption II" okudagram)

In 2369, the Aries was on a deep space exploration mission to Sector 22846. The ship was named on the chart "Starfleet Operations-Sectors 21538-23079" on the Enterprise-D observation lounge. (TNG: "Chain of Command, Part I" okudagram)

Later that year, the USS Aries was on a deep space exploration mission in Sector 21602. The ship was named on the chart "Starfleet Operations - Sectors 21538-23079" that was on display in the ops aboard Relay Station 47. (TNG: "Aquiel" okudagram)

In 2370, the Aries' point of departure was Lilliput IX. The starship arrived at Deep Space 9 on stardate 47568.2. Aries was named on the Deep Space 9 arrival roster. (DS9: "Whispers" okudagram)

In 2379, the Aries was assigned to Star Fleet Battle Group Omega, which was to rendezvous with the USS Enterprise-E when it was attempting to escape from Romulan territory and the Reman warbird Scimitar. The starship was named on the Battle Group Omega roster in the Enterprise-E bridge. (Star Trek Nemesis okudagram) 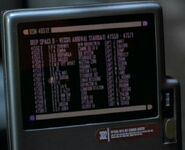 The Aries was listed on an arrival roster

According to the Star Trek Encyclopedia (4th ed., vol. 1, p. 44), the Aries was named for the constellation of Aries (Latin for "Ram") and the PanAm moon landing shuttle Aries from the movie 2001: A Space Odyssey, which ferried Dr. Heywood R. Floyd to the Moon.

The class and registry were derived from the charts seen in "Brothers" and "Chain of Command, Part I". The registry was seen again in the tachyon detection grid, on the hull of the shuttlepod Cousteau, and in the list of starships from Star Trek: Nemesis. In the script for "The Icarus Factor", the ship was called the Ares. [1] This spelling was altered for the next mention of the ship, in "Redemption II", where the ship was called the Aries.

In an internal list of starships, from 26 September 1990, the Aries was identified as a scout ship. [2]

In scene cut from "Chain of Command, Part II" in which the Cardassians threatened to invade Minos Korva, the Aries, the Sutherland, and USS Berlin were dispatched to Sector 21527 to assist the Enterprise-D. However, because the ships were three days away, the Enterprise was forced to find an alternative means of preventing the invasion. [3]

The Star Fleet Technical Manual by Franz Joseph listed a Hermes-class Aries with the registry of NCC-602. Many years after the publication of this technical manual, Mike Okuda assigned this registry to the USS Oberth in a starship status display for the movie Star Trek VI: The Undiscovered Country.