The following is a list of personnel assigned to the USS Brattain during her fateful trip into a Tyken's Rift. The Brattain had a crew complement of thirty-four, and everyone except scientific advisor Andrus Hagan were found deceased in the Tyken's Rift.

These two crewmembers were among the dead bodies in the cargo bay of the Enterprise-D. Doctor Beverly Crusher examined them along Ensign Martinez and ordered him back to sickbay. During the following examination she heard noises. (TNG: "Night Terrors") 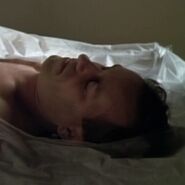 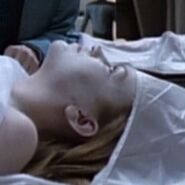 Played by Val
Add an image to this gallery

Twelve crewmembers were stored in a cargo bay on board the Enterprise-D. Doctor Crusher examined these bodies when she heard noises and in the following hallucination, the dead bodies sat up. (TNG: "Night Terrors")

The bodies were played by the three background performers listed above, Gerard David, Jr. and eight unknown performers.
At the first day of shooting, Tuesday 8 January 1991 the production planned to use thirteen mannequins and the performers Val and Moriarty, having fifteen dead bodies. This was dropped on Thursday 10 January 1991 when only twelve dead bodies were required and second assistant director Adele G. Simmons placed real background performers under the body bags instead of mannequins.

Played by Gerard David, Jr.
Add an image to this gallery

This female scientist was found dead on the bridge of the Brattain. She manned the conn station of the starship. (TNG: "Night Terrors")

She was played by an actress with the last name Thompson.

This science division crewman was found dead on the bridge of the Brattain by an away team of the USS Enterprise-D. He was stabbed and manned the ops station of the bridge. (TNG: "Night Terrors")

He was played by an actor with the last name Moran.

This male scientist was found dead on the bridge of the Brattain. According to Worf, he died due to massive phaser burns – likely on a setting of 6 or 7. (TNG: "Night Terrors")

He was played by an actor with the last name Truman and listed as "charred body" on the call sheet.
Retrieved from "https://memory-alpha.fandom.com/wiki/USS_Brattain_personnel?oldid=2407510"
Community content is available under CC-BY-NC unless otherwise noted.