The Hood, under the command of Captain Robert DeSoto, was William T. Riker's assignment after he left the USS Potemkin some time after 2361. While Riker served as first officer, Geordi La Forge was also transferred to the ship in 2362 after completing a tour on the USS Victory.

In the course of his duties on the Hood, Will Riker refused to allow Captain DeSoto to transport to the surface of Altair III for an away mission. Riker felt the mission was too dangerous to expose the ship's CO to such a risk. (TNG: "Encounter at Farpoint", "The Pegasus")

In 2364, the Hood rendezvoused with the USS Enterprise-D in orbit of Deneb IV, to transfer crew and equipment, including the ship's new first officer, William Riker, CMO Beverly Crusher, and Geordi La Forge, as well as Admiral Leonard McCoy, who inspected the medical facilities of the Enterprise-D. (TNG: "Encounter at Farpoint")

Two years later, the Hood and USS Monitor were dispatched to the Romulan Neutral Zone in order to counter a possible Romulan sneak attack emanating from a cloaked Romulan base on Nelvana III with the goal to retake the Neutral Zone. (TNG: "The Defector")

A few months later, the Hood was due to assist the Enterprise-D on a terraforming project on Browder IV. (TNG: "Allegiance")

The Hood rendezvoused with the Enterprise-D again a couple of weeks later to drop off Tam Elbrun for the "Tin Man" mission. (TNG: "Tin Man")

In 2368, the Hood joined Captain Picard's fleet that blockaded the Klingon-Romulan border during the Klingon Civil War. The ship was one of twenty-three assembled for the fleet and was one of the seventeen chosen for the tachyon network. Identified by its name and registry number, the ship's position in the network was monitored from the Enterprise-D.

When the network was disrupted by a high-energy burst released by the Romulans, the net was no longer effective in a radius of ten million kilometers around the USS Sutherland. Subsequently, Picard ordered the fleet to proceed to Gamma Eridon at maximum warp, where the fleet would attempt to reestablish the net before the Romulans got there. (TNG: "Redemption II" okudagram)

In 2369, the Hood was at Starbase 134 for a major systems upgrade. The ship was named on the chart "Starfleet Operations-Sectors 21538-23079" in the Enterprise-D observation lounge. (TNG: "Chain of Command, Part I" okudagram)

Later that year, the Hood was named on the chart "Sector Ipai Relay Log – Relay Message Flow 1293" in Relay Station 47 Ops. This ship, in Sector 0912, sent a message to Relay Station 102-A via encoded epsilon. The ship's next mission was a warp drive testing of the ship's Mark VI warp drive version engines. (TNG: "Aquiel" production art)

The Hood fought in several engagements during the Dominion War. In early 2374, it was part of the task force that participated in Operation Return, the battle to retake Deep Space 9. (DS9: "Favor the Bold", "Sacrifice of Angels")

In late 2374, the Hood participated in the First Battle of Chin'toka, traveling in close formation with the USS Defiant. (DS9: "Tears of the Prophets")

In 2379, the Hood was part of Star Fleet Battle Group Omega, a group of starships assigned to Sector 1045 near the Romulan Neutral Zone to intercept the Scimitar. (Star Trek Nemesis)

Orbiting Deneb IV with the USS Enterprise-D in 2364 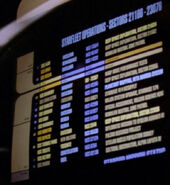 The Hood is listed on a starship mission status in 2367

The Hood in Operation Return, 2374

The Hood fires upon a deactivated Cardassian orbital weapon platform, 2374

The Hood is listed as a participant in Battle Group Omega, 2379

There had been some controversy regarding the registry number of the USS Hood. The ship was already first seen on-screen in the Star Trek: The Next Generation pilot episode "Encounter at Farpoint" in effect shots created by ILM, using the original Excelsior-class studio model built by them for Star Trek III: The Search for Spock. No registry number was visible in these shots, but on pictures available on-line, the model was clearly labeled "USS Hood, NCC-2541". [1] Had this registry number remained canon, it would have made the Hood a close contemporary sister ship of the USS Repulse (NCC-2544), further establishing a Starfleet practice that when a ship was named for a historical counterpart they are sometimes paired in the same class with other contemporary historical counterparts. The historical HMS Hood and HMS Repulse were contemporary British battle cruisers who shared a similar fate in World War II. Other examples where this was practiced were the USS Enterprise (NCC-1701) and the USS Lexington (NCC-1709) as well as the USS Monitor (NCC-61826) and the USS Merrimac (NCC-61827).

Apparently the original labeling was forgotten about or ignored by the production staff, as another, much higher registry number, NCC-42296, was devised later and used consistently in various LCARS graphics, for example the starship mission status and the screen showing Star Fleet Battle Group Omega. Nevertheless, a profile view, shot for, but not yet used in the first season of the new The Next Generation series, turned up in the second season opening episode "The Child" as the USS Repulse NCC-2544. However, it took until 2012 for the remastered version of the episode for the registry number "NCC-2541" to become discernible, though only just barely (and therefore overlooked by the digital artists at CBS Digital), on the aft of the warp nacelles, thereby providing the on-screen confirmation that the model originally was indeed relabeled "NCC-2541" in 1987.

The Hood's appearance in "Tears of the Prophets" was confirmed by John Gross and Karen Sickles of Digital Muse in a 25 June 1998 post by DS9 Visual Effects Supervisor David Stipes on the newsgroup alt.tv.star-trek.ds9. He noted that during the labeling of the CGI model of the USS Hood, a typographical error was made, mistakenly giving it the registry of the USS Lakota, NCC-42768. [2]

According to the Star Trek Encyclopedia (1st ed., p. 129), USS Hood, like the Constitution-class USS Hood, was "named for British Admiral Sir Horace Hood, who fought in the Battle of Jutland during World War I", though that reference was dropped in the later editions of the Star Trek Encyclopedia, as it was uncommon to name a ship for a still serving member in any navy (the historical Hood was already nearing completion when Horace Hood died in action). The Star Trek Fact Files (part 86, 1998) stated that Hood was named for Horace's direct ancestor, 18th century British Admiral Viscount Samuel Hood after whom the British battle cruiser HMS Hood (launched and christened by Horace's widow) was also named.

The USS Hood was mentioned in numerous Star Trek novels, e.g., Imzadi, Demons of Air and Darkness, A Time to Heal, Articles of the Federation, and A Singular Destiny. The latter describes the Hood as still being in service as of 2381.

According to the 1994 Malibu Comics Star Trek: Deep Space Nine issue #6, the Hood participated in the Battle of Wolf 359 in 2367. Therefore, she would have been the sole vessel surviving the battle as referenced in TNG: "The Drumhead". Canon sources, however, indicate the surviving vessel was the USS Ahwahnee. (TNG: "Redemption II" okudagram)

In the Next Generation PC game A Final Unity, if the Enterprise is destroyed, a message plays in which a Starfleet admiral says that the USS Hood had been dispatched to investigate.

The USS Hood was one of the playable Excelsior-class starships in skirmish mode in Star Trek: Legacy.