A list of personnel assigned to the Federation starship USS Kelvin during 2233. The number of survivors of Nero's attack was stated to be eight hundred.

These personnel, in the prime timeline, would have been on the ship before the timeline split caused by Nero's incursion. Their ship would not have changed course to investigate the temporal anomaly and would not have engaged Nero's Narada, but would have continued with their mission.

These Starfleet officers served on the bridge of the USS Kelvin in 2233 when the Romulan Nero attacked the ship with his own, the Narada. They witnessed the death of the captain and were thrown off their seats by explosions. Later acting captain George Kirk evacuated them before he set a collision course and destroyed the Kelvin. (Star Trek) 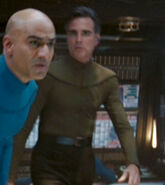 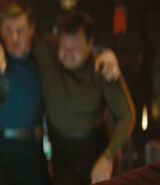 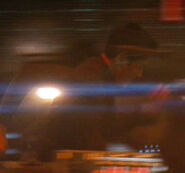 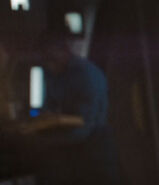 This crewmember of the USS Kelvin was shouting from a second level to clear the area below him during the evacuation of the Kelvin. (Star Trek)

This Kelvin crewmember was played by actor Jeff Castle.

This sciences division crewman was on the stairs when Captain Robau was walking through aboard the Kelvin. (Star Trek)

This crewmember was played by an unknown actress.

This female crew member of the USS Kelvin was running in a corridor when the Narada attacked the Kelvin and she was killed due to an explosion creating an air vacuum, blowing her out into space. (Star Trek)

This Kelvin crew member was played by stunt actress Heidi Moneymaker. "We had [her] on an overhead trolley, and air movers simulated suction as we pulled her out of the hole," commented physical effects supervisor Burt Dalton. A CGI version of the character was created by Industrial Light & Magic and visually replaces the stuntwoman on-screen, as the female crewman flies into the vacuum of space. (Cinefex, No. 118, p. 54)

This alien female served as a doctor aboard the Kelvin. When the ship was attacked by Nero and the Narada, she accompanied Winona Kirk with the help of three medical technicians to the evacuation pod. After the pod left the Kelvin, she helped Winona to give birth to James T. Kirk. (Star Trek)

This alien doctor was played by actress Sonita Henry.

This Starfleet officer served as an engineer aboard the USS Kelvin in 2233. After the first attack of the Narada he told the captain that the warp drive and the weapons went down and the ship's main power was only active at 38%. During a following attack he was thrown through the room by an explosion. (Star Trek)

This officer was played by Tim Griffin. The script identifies him as the ship's chief engineer.

This female Starfleet officer served as helmsman aboard the USS Kelvin in 2233. She witnessed the loss of the life signal of Captain Robau and manned the station when the Narada attacked the Kelvin. During the following explosions she hit the ground. (Star Trek)

The Helmsman was portrayed by Freda Foh Shen and her stunt double Peipei Yuan.

This female operations division Starfleet officer served as the communications officer aboard the USS Kelvin in 2233. Captain Robau ordered her to prepare the shuttles for evacuation as she sat awestruck at the sight of Ayel on the main viewer. (Star Trek)

The comm. officer was portrayed by stunt actress Christina Weathersby.

This Starfleet lieutenant served as pilot for Medical shuttle 37 which carried Winona Kirk, a doctor, and two medical technicians aboard when it left the Kelvin. The pilot received the command of acting captain George Kirk that the shuttle had to depart immediately. (Star Trek)

The pilot was played by Billy Brown.

These three medical technicians served aboard the Kelvin during the attack of Nero's Narada in 2233. The first and female technician escorted the other two, Winona Kirk, and the doctor out of the sickbay and told them to get the medical shuttle 37. The other two accompanied the doctor and Winona aboard the shuttle and assisted during the birth of James T. Kirk. (Star Trek) 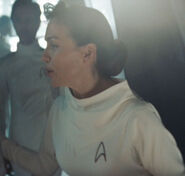 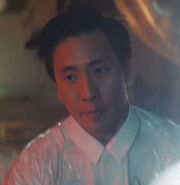 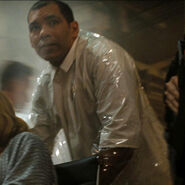