This is a list of USS Odyssey personnel in 2370, at the time of the ship's destruction at the hands of the Jem'Hadar during a rescue mission. While all hands on-board were lost, most non-essential crewmembers and all civilians had been offloaded at Deep Space 9 prior to departure. (DS9: "The Jem'Hadar")

These Starfleet officers served on the bridge of the Odyssey shortly before its destruction by the Jem'Hadar in 2370. (DS9: "The Jem'Hadar") 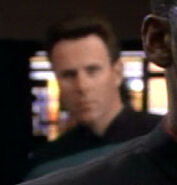 Played by Robert Cox
Add an image to this gallery

The chief engineer of the Odyssey was a male officer. He was ordered by Captain Keogh to get the ship's port nacelle, which had been damaged by weapons fire from Jem'Hadar fighters, back online. Before he could do so, however, the Odyssey was destroyed with all hands aboard. (DS9: "The Jem'Hadar")

This character appeared as an off-screen voiceover..
He was voiced by an unknown actor.
In the novel
The Brave and the Bold, Book One, the character is called Mislav Kovac.

The first officer of the USS Odyssey was a Starfleet lieutenant commander serving under Captain Keogh.

This officer called the ship to red alert, and manned the tactical station in the battle that precipitated the Dominion cold war. Throughout the battle against the Jem'Hadar, he continued to update Keogh with the ship's damage report. He later died, along with the rest of his crewmates, when the Odyssey was destroyed in a suicide run made by a Jem'Hadar fighter. (DS9: "The Jem'Hadar")

The Odyssey first officer was played by actor Michael Jace.
The Keith R.A. DeCandido novel
The Brave and the Bold, Book One gives the name of the XO as Joe Shabalala, while the Star Trek Customizable Card Game card uses the name Jace Michaels, utilizing the actors own name.

The tactical officer of the USS Odyssey, who also served as ship's second officer, was a member of Starfleet who served under Captain Keogh until the ship's destruction and loss with all hands - herself included. (DS9: "The Jem'Hadar")

The second officer was played by actress Sandra Grando.
She was credited as "2nd Officer" in the episode end credits, and originally had lines but they were cut, though she did appear in the background as a tactical officer.
In the novel
The Brave and the Bold, Book One, the character is called Maritza Gonzalez.
Retrieved from "https://memory-alpha.fandom.com/wiki/USS_Odyssey_personnel?oldid=2530319"
Community content is available under CC-BY-NC unless otherwise noted.