The following is a list of personnel assigned to the USS Pegasus in 2358.

In all, 71 crewmembers were killed when the Pegasus was lost; a total of nine crewmembers had escaped the ship before its apparent destruction. (TNG: "The Pegasus"; ENT: "These Are the Voyages...")

The ship's chief engineer joined the first officer and most of the bridge crew in turning against Captain Pressman in 2358. This officer was among those who died in the ensuing accident. (TNG: "The Pegasus")

This chief engineer was only mentioned in dialogue.

These three crewmembers were found dead aboard the Pegasus, after the ship was relocated in 2370, when an away team consisting of Commander Riker and Admiral Erik Pressman beamed aboard the starship. Their bodies were preserved due to the vacuum aboard the ship which was partially embedded into an asteroid. (TNG: "The Pegasus") 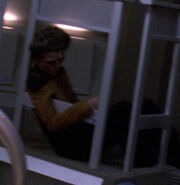 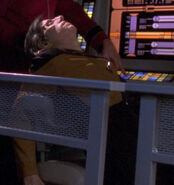 The ship's first officer led most of the bridge crew in turning against Captain Pressman. An explosion main engineering with heavy casualties had led them to conclude that Pressman's illegal experimentation of a Federation phasing cloaking device was endangering the safety of the crew. After Pressman and his remaining supporters fled the ship, the first officer and the rest of the crew were killed during an attempt to deactivate the cloak. (TNG: "The Pegasus")

This first officer was only mentioned in dialogue.
Retrieved from "https://memory-alpha.fandom.com/wiki/USS_Pegasus_personnel?oldid=2386750"
Community content is available under CC-BY-NC unless otherwise noted.