In 2366, Princeton saw action and was destroyed along with thirty-eight other starships at the Battle of Wolf 359. (TNG: "The Best of Both Worlds, Part II")

The wreck was later among the vessels found at the Surplus Depot Z15 located in orbit of Qualor II. (TNG: "Unification I") 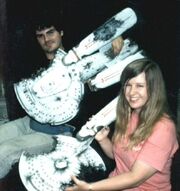 The studio model of the Princeton (picture at right) was created for its appearance in "The Best of Both Worlds, Part II."
The name and registry came from the studio model. The
Princeton was classified as a Niagara-class starship in an internal list of starships, dated September 26, 1990. [1] This information about the ship later appeared in the Star Trek Encyclopedia (4th ed., vol. 2, p. 332), where the ship's registry was given as NCC-58904. The image shown at left appeared in the special features of the TNG Season 4 DVD.
StarTrek.com identified the model that was labeled as USS Princeton as the Rigel-class USS Tolstoy mentioned in dialogue, [2] and identified the reused Constitution-class saucer model wreck as the Niagara-class USS Princeton. [3]

Retrieved from "https://memory-alpha.fandom.com/wiki/USS_Princeton?oldid=2426832"
Community content is available under CC-BY-NC unless otherwise noted.