The following crewmembers served aboard the USS Saratoga in 2286: 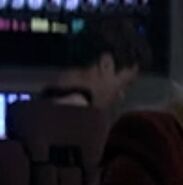 This female Human served as the captain of the Saratoga during the ship's encounter with an unknown alien probe while patrolling Sector 5 along the Neutral Zone. (Star Trek IV: The Voyage Home)

This unnamed officer, played by Madge Sinclair, is the first female Starfleet starship captain portrayed on Star Trek, who would later play another Starfleet captain, Silva La Forge.
She was described in the script as "a concerned Starfleet professional." According to the Pocket Books novelization of Star Trek IV: The Voyage Home her name was Captain Alexander (β).
Other novel references, including The Star to Every Wandering, establishes her name as Margaret Alexander and in The Star to Every Wandering she served under Captain Kirk before becoming a captain. She later became married, changing her surname to Sinclair-Alexander and she was promoted to admiral, where she was the officer who recruited Kirk to attend the christening ceremony aboard the USS Enterprise-B.

This male Efrosian commander served as the helmsman during the ship's encounter with the probe.

During their investigation, he established contact with Starfleet Command for the captain, and was standing by to receive their communications.

Later, as the probe passed over the Saratoga, indicated that thruster controls and emergency thrusters were gone in response to her order to reduce closing speed. (Star Trek IV: The Voyage Home)

The helmsman was played by actor Nick Ramus. His makeup was sculpted by Brian Wade and applied by Rick Stratton and consisted of a forehead piece, and nose piece, lace hair and contact lenses; it was later reused for the Federation President in Star Trek VI: The Undiscovered Country.
According to the film's novelization, his name was Chitirih Ra-Dreii (β).

This female Human non-commissioned officer served as the navigator during the ship's encounter with the probe. (Star Trek IV: The Voyage Home)

She was played by an unknown actress.

This male Human science officer initially informed the captain that they were tracking a probe of unknown origin. He was instructed by the captain to continue transmitting universal 'Peace' and 'Hello' in all known languages, while she contacted Starfleet Command.

As the probe approached the ship, he explained that the peobe's call was being carried on an amplification wave that they we unable to isolate and that was negatively affecting the ship's systems. When the probe finally passed over the Saratoga, he delivered the damage report, informing the captain that they were only operating on reserve power, as all systems had failed. (Star Trek IV: The Voyage Home)