This is a list of personnel assigned to the USS Shenzhou.

This blue-skinned male alien served as a bridge officer aboard the Shenzhou during the Battle of the Binary Stars in 2256. He was killed when the bulkhead behind him was blown out by enemy weapons fire, and he was blown into space. (DIS: "The Vulcan Hello", "Battle at the Binary Stars")

This alien officer was played by actor Jimmy Chimarios, who received no credit for this appearance.
According to the novel Desperate Hours, this is Lieutenant Troke, a Tulian, which is a cousin species of the Bolians. Troke served as deputy chief of the sciences division under Saru.

This female crewmember wore a helmet on the bridge of the Shenzhou, her headgear stenciled with the ship's name on the wearer's left side at bottom. Serving at the auxiliary tactical station during the Battle of the Binary Stars, she was injured when her console exploded. Two crewmembers assisted her from the bridge. (DIS: "The Vulcan Hello", "Battle at the Binary Stars")

This crewman was portrayed by Paulina Miel. A crewmember with the same helmet is later seen walking the corridors of the USS De Milo.
The novel Desperate Hours identifies the character as Ensign Jira Narwani, a junior tactical officer, and calls her headpiece a tactical helmet. The video "A-Z Glossary" from the official Discovery Twitter account also refers to this character as Narwani. [1]
The character's helmet was created by prop maker WKFX, who referred to the character as "Snail Girl". [2]
In Star Trek Online, players can purchase a bridge officer named Marta Okataya, who has a helmet identical to the one worn by this character. [3]

This medical officer was played by an unknown actress. 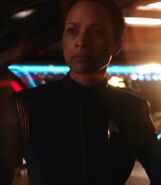 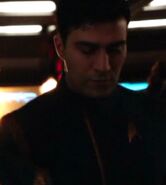 These female and male security officers were both ordered to remand Michael Burnham to the brig by Captain Georgiou. (DIS: "Battle at the Binary Stars")

These security officers were played by unknown performers.

This transporter chief transported Sarek back to Vulcan in 2249 following Sarek's release of Michael Burnham to Captain Georgiou. (DIS: "Battle at the Binary Stars")

This transporter chief was voiced by an unknown actor.

This transporter chief transported Commander Burnham and Captain Georgiou to the Sarcophagus during their attempt to capture T'Kuvma. He later transported Burnham back to the ship, but was unable to transport Phillipa because her life signs were lost. (DIS: "Battle at the Binary Stars")

This transporter chief was played by an unknown actor.