The USS T'Plana-Hath (NCC-1004) was an Engle-class Federation starship operated by Starfleet during the mid-23rd century.

In 2256, the T'Plana-Hath was among the starships that arrived at a binary star system to reinforce the USS Shenzhou against a Klingon force. In the ensuing battle, it came under heavy attack from three Klingon warships, but was relieved by the Shenzhou. (DIS: "Battle at the Binary Stars")

An illuminated memorial to the T'Plana-Hath was displayed in the mess hall aboard the USS Discovery after the battle. (DIS: "Lethe") 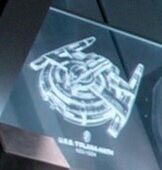 Memorial wall aboard Discovery
Add an image to this gallery
The name and registry number of the T'Plana-Hath are visible on an illustration of the ship at StarTrek.com.

Retrieved from "https://memory-alpha.fandom.com/wiki/USS_T%27Plana-Hath?oldid=2399059"
Community content is available under CC-BY-NC unless otherwise noted.