The USS Vengeance was a 23rd century Federation Dreadnought-class starship operated in secret by Starfleet via Section 31. Unlike other ships operated by the Federation and Starfleet, it was created specifically for combat and was completely unmarked, with no registry number or nomenclature visible on the hull. The ship was commissioned in 2259 and it was launched from the Io Facility starbase, a spacedock in orbit of the Jovian moon Io. Its first, and only, commanding officer was Admiral Alexander Marcus. As of 2263, it was by far the largest ship operated by Starfleet.

The USS Vengeance was designed by Khan Noonien Singh and Section 31 for the purpose of preparing the Federation for what was deemed an inevitable war against the Klingon Empire and its other rivals.

Despite the secrecy of the starship's construction, a small model of the Vengeance was openly displayed by Admiral Marcus in his office at Starfleet Headquarters alongside other notable vessels from Starfleet history, including the NX-class Enterprise and the USS Kelvin.

Believing that Marcus had murdered his entire crew whom Marcus was holding as hostages to compel Khan's servitude, Khan betrayed Marcus and Section 31 by providing the coordinates of the Vengeance after surrendering to Captain Kirk on Qo'noS during which he saved the lives of Kirk, Spock, and Nyota Uhura. Kirk then sent Montgomery Scott to investigate, who piloted a shuttlecraft into the spacedock facility where the Vengeance was moored. Following the arrival of Kirk and Khan aboard the USS Enterprise, the Vengeance appeared in Klingon space and intercepted the starship. Admiral Marcus, in command of the Vengeance, demanded that Kirk hand Khan over to him. Instead, Kirk ordered the Enterprise to warp to Earth so that Khan could stand trial as a war criminal and expose his secret alliance with the admiral.

Kirk and Khan then donned thruster suits and space jumped through a debris field in an attempt to commandeer the Vengeance, during which Khan saved Kirk's life for the second time. Following their arrival on the bridge, Scott attempted to stun Khan on Kirk's orders. Khan retaliated and killed Admiral Marcus and seized command of the ship for himself, taking Kirk and his crew hostage. Acting Captain Spock allowed Khan to transport seventy-two advanced long-range torpedoes allegedly containing Khan's fellow Augments to the Vengeance, in a negotiated exchange for the Enterprise's safety and the return of Kirk, Scott, and Carol Marcus. Khan returned the three hostages to the Enterprise but resumed firing on the ship as soon as they were transported aboard. Having anticipated Khan's betrayal, Spock had ordered Doctor Leonard McCoy to remove the cryo tubes from the torpedoes, and triggered the torpedoes within the Vengeance's cargo bay. The Vengeance was crippled and Khan was further enraged, believing his crew had been killed in the detonation.

As the heavily damaged Enterprise was pulled into Earth's gravity, a vengeful Khan piloted his ship into the atmosphere, setting course for San Francisco and Starfleet Headquarters. Narrowly missing the Enterprise, the Vengeance crashed on the surface, obliterating landmarks such as the Alcatraz Penitentiary. Continuing on into San Francisco Bay, the Vengeance briefly regained altitude, then smashed into Fisherman's Wharf and Telegraph Hill. The impact of the ship into the city broke the primary hull from the secondary hull and momentum carried the wrecked primary hull to a point short of the Transamerica Pyramid.

Through a hull breach in the main bridge, Khan leaped from the wreckage of the Vengeance and led a pursuit through the streets of San Francisco, where he was ultimately apprehended by Spock and Uhura.

Nearly a year later, Starfleet held a memorial service for the lives lost due to Khan's violent acts, including those killed when the Vengeance crashed. At this memorial, Kirk spoke out against what the ship represented and reminded the assembled audience that Starfleet had risked becoming as warlike as its enemies. (Star Trek Into Darkness)

The Vengeance was specifically designed to be a combat vessel and was much larger, faster, and more heavily armed (with more advanced weaponry than other Federation ships of the same time period). According to Khan, the Vengeance had "twice the size… three times the speed", and its warp drive was much more advanced in comparison to other Starfleet ships due to the Dreadnought-class having been built as a battle cruiser. This was proven by the Vengeance easily catching up to the Enterprise at warp within mere minutes of the Enterprise leaving Qo'nos. Apart from its combat role, the Vengeance was also designed to be a capital ship with command and flag facilities, similar in role to aircraft carriers in 20th/21st century navies.

A reference vessel for Khan's comparison is not given, but probably is meant to be the Enterprise.

The Vengeance, under normal circumstances, would carry a very large crew complement, up to 6,000. However, its design and automation allowed for a minimal crew if necessary and even a single-man crew in emergencies. Its advanced phasers could be fired while the ship was at warp. The ship was also equipped with additional technologically-advanced features, including better shielding, more advanced transporters, and enhanced warp capabilities. (Star Trek Into Darkness)

The weapons systems of the Vengeance included an array of advanced phasers and massive swivel-mounted torpedo launchers that could be deployed from beneath the saucer section. The Vengeance could also launch drones which were, in turn, capable of launching several photon torpedoes before reaching and deliberately ramming their respective target(s). (Star Trek Into Darkness)

The Vengeance's phaser armament was extremely powerful – a focused barrage could penetrate the defensive shields of a standard starship (even at warp velocities), breach the hull and damage critical systems, and thereby force the other ship from warp back into normal space. (Star Trek Into Darkness)

The Vengeance was referred to by name only once on-screen, by an unidentified crewmember over radio transmission as its crew shuttles prepared to enter the Io drydock facility. Even the displays aboard the Enterprise referred to the Vengeance only as "unidentified vessel" and did not specify it as a Starfleet or Federation ship of any type.

Analysis of a current San Francisco map suggests the final resting place of the Vengeance's hull to be Jackson Square. This implies the Vengeance came to rest several blocks short of Starfleet Headquarters, Khan's intended target.

After the design of USS Vengeance was conceptualized, the writers of Into Darkness conceived of various ways the ship could be used by themselves imagining Admiral Marcus' devious plan (i.e., strategizing as Admiral Marcus would). (Cinefex, No. 134, p. 75)

Developing effective illumination for Vengeance was tasked to Industrial Light & Magic. "The tricky thing about the black ship was, of course, lighting it against the background of space." noted ILM Senior Visual Effects Supervisor, Roger Guyett. ILM's development team performed turntable studies of the Vengeance, experimenting with lighting effects which enabled the mostly black object to be sufficiently viewable against interstellar darkness. Vengeance was illuminated by subtle back-lit effects generated from nearby luminous gas clouds, as well as, application of rim lighting (to clearly define edges) and specular values (to highlight minute surface details on the ship's dark hull). (Cinefex, No. 134, pp. 75 & 84)

QMx FX Cinema Arts (the prop and model shop of Quantum Mechanix) was asked to illustrate Star Trek's "history" of space flight by creating a series of physical representations. QMx constructed fourteen disparate props, some of which were featured as "hobby" models in Admiral Marcus' office. [1] Roberto Orci opined that having a desktop model of the Vengeance in the film was a mistake (i.e., "spoiler") and would not have been permitted if he had been present on set that day. Orci suggested "… one could argue that a pre-existing design was recommissioned and altered to be a weapon of war", at least partially justifying how the Vengeance could have been built right under Starfleet's collective "nose" without serious outcry. [2]

Quantum Mechanix has announced plans to retail twelve and thirty-six inch long replicas of the ship in "Collector's Scale" and "Artisan" editions.

Mattel released scaled Hot Wheels six-inch replicas of the USS Vengeance to retail in May 2013. They were also included as premiums with retailer exclusive sets of the Into Darkness Blu-ray and Blu-ray 3D in September 2013. A smaller three-inch version was also released in 2014.

Hasbro released a Kre-O toy version of the ship and Hallmark released a USS Vengeance Christmas ornament in 2014. Star Trek: The Official Starships Collection also released a replica as a "special issue" in 2014.

The thirty-six-inch QMx replica of the USS Vengeance

The twelve-inch QMx replica of the USS Vengeance 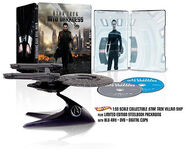 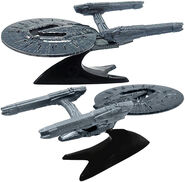 According to the "Top Secret Security Review-31 Command", the Vengeance was a key outcome of the "Praxxis Project". Agent John Harrison (Khan) was retasked to the Io Facility to conclude testing on the ship. Once at the facility, Harrison compromised the project by not providing the final status report to Admiral Marcus and thus abandoning Khan's original assignment. If Marcus had received the report, the admiral would have likely dispatched the Vengeance to defend the Federation colony on Ganalda IV, which was threatened by a Klingon fleet.

In the fourth issue of the comic Star Trek: Khan, the Vengeance had been in construction following the destruction of Vulcan. After Admiral Marcus brought Khan out of suspended animation and gave him a new identity as John Harrison, he gives Khan the task of helping advise Section 31 on possible enhancements to Starfleet weapon, shield and propulsion technology, which is to be incorporated aboard the Vengeance. In five months, Khan was able to give the Vengeance's warp drive more unprecedented capability by going up to Warp 10.

The Vengeance was added to the video game Star Trek Online as part of the Agents of Yesterday expansion. In the game, it goes by the title of "Kelvin Timeline Intel Dreadnought Cruiser" with the in-story explanation that scientists had discovered the Kelvin Timeline and opted to make these ships based off of those from this universe as their technology was similar to those of the Kelvin Timeline, despite a 150 year gap.