Holograms stored aboard the USS Voyager; organized by program and description.

The Adventures of Captain Proton

These three Klingons were part of B'Elanna Torres' holographic program she created with Tom Paris in 2374 to prepare herself for her Day of Honor.

After Torres talked to Neelix in the mess hall, she entered the program where these three Klingons and Moklor welcomed her. The first Klingon gave Torres a plate with heart of targ. The second Klingon, a female, handed her the grail of Kahless, and the first and the third Klingon used the painsticks at Torres.

Following this experience, Torres wanted to leave the program but was held back by Moklor whom she pushed away. She then engaged the first Klingon in a hand-to-hand fight and then left the program. (VOY: "Day of Honor")

They filmed their scenes on Thursday 3 July 1997 on Paramount Stage 16. 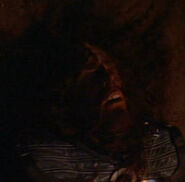 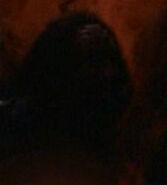 These Klingons were created for a Hirogen simulation run aboard the USS Voyager in 2374 that the Hirogens used to hunt the Voyager crew as prey. Kathryn Janeway, who underwent cosmetic surgery to appear Klingon, was among the crewmembers who fought in this program. Neelix, also appearing Klingon, later persuaded them to attack the Nazi characters in the World War II program. (VOY: "The Killing Game", "The Killing Game, Part II")

With the exception of Peter Hendrixson, who is listed as "Klingon" in the end credits of Part II, all other stunt and background performers received no credit for their appearances. They were identified by the call sheets of the episode. On the original call sheet for the Klingon group fight scene in Part II, Michael Braveheart and Todd Slayton are listed as Klingons but were replaced by Angus McClellan and Brian Donofrio on the revised call sheet.
Wade Miller also appeared as a Klingon but was identified as a crewmember of Voyager. 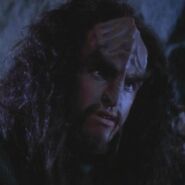 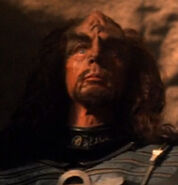 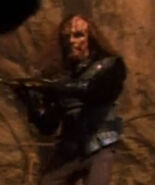 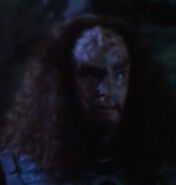 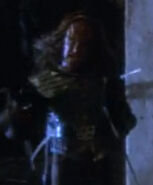 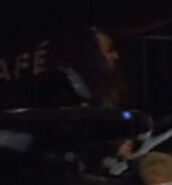 In 2375 the crew aboard Voyager ran several simulations of their Fort Knox strategy to be more efficient. During this simulation Captain Janeway, Tuvok, Seven of Nine, and Harry Kim beamed aboard a Borg sphere to steal a transwarp coil. Because of a few seconds the Borg adapted and a Borg landing party of four appeared on the bridge. (VOY: "Dark Frontier")

All Borg were played by background and stunt performers who received no credit for their appearance. 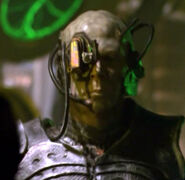 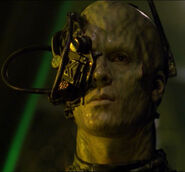 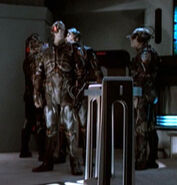 A Nausicaan guard was part of Tom Paris' hockey holoprogram in 2377. During play, the guard high sticked frequently. Upon leaving the holodeck after their session, Harry Kim asked Paris if he had to program the Nausicaan to high stick often. Paris replied, "Well, you play hockey, you got to expect a few lumps." (VOY: "Critical Care")

The shuttle pilot was part of a holodeck orbital skydiving program of B'Elanna Torres. When she told the pilot to increase the shuttle's altitude, he objected to since they were already at 200,000 meters and any higher would risk thermolyzing. Torres overrode his objections. (VOY: "Extreme Risk")

The pilot was played by actor Daniel Betances who filmed his scene on Monday 29 June 1998 on Paramount Stage 9. 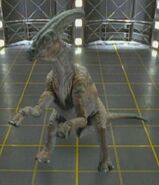 A hadrosaur seen on the holodeck, possibly the ancient ancestor with the unknown species

A hologram of a Voth-like dinosaur

Voth holograms were used by The Doctor to determine the species of one of the Voth that was captured on USS Voyager. The being had 47 genetic markers that were identical to Humans and The Doctor determined that they had evolved on Earth. The Doctor used a hologram to show what the Hadrosaur would have evolved into if it had survived the extinction of the dinosaurs. The Hadrosaur was a direct evolutionary predecessor of the Voth. (VOY: "Distant Origin")

Both holograms were computer-generated.
Community content is available under CC-BY-NC unless otherwise noted.
Advertisement