Unearthly Stories was a science fiction magazine of which a cover sketch was seen in the "Mission Inquiry: Far Beyond the Stars" special feature on the DS9 Season 6 DVD set. It was the August 1953 issue, which cost 25 cents. Its slogan was "Is it science fiction – or science future".

Like most other sketches featured in the documentary, it may have decorated the walls of the Incredible Tales office, though if it was, it was never visible enough to be identified. The documentary "Deep Space Nine Sketchbook: John Eaves" also shows a colored version of the cover drawing. 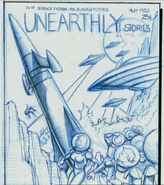 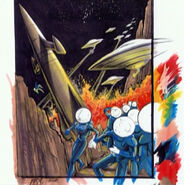 Colored cover design
Add an image to this gallery
Retrieved from "https://memory-alpha.fandom.com/wiki/Unearthly_Stories?oldid=2394289"
Community content is available under CC-BY-NC unless otherwise noted.