Unification is a Blu-ray Disc release, featuring a theatrical-length re-edit of "Unification I" and "Unification II" in 1080p high-definition. The set was released in North America on 19 November 2013. This release was issued in two versions, English-language cover art for the USA and English-Canada, and French-language cover art for French-Canada, though disc content was otherwise identical, including the two language tracks.

As with the previous theatrical-length releases – "The Best of Both Worlds" and "Redemption" – all special features are only included on this release and not in any of the regular boxed season releases. [1] Outside North America, the disc was released in Japan (actually there released first) and Australia, but was not slated for release in the United Kingdom or other European territories, though it became available in Germany at select shops in December 2013, [2] and at Amazon.de on 4 December 2014. [3]

The Japanese issue came in a Viva Elite case without the cardboard slipcover, as featured on the right, and was concurrently released with the previous outing, they becoming the only two ones of the "special releases" issued in that country. Aside from Japan, the Australian and French-Canadian releases were also marketed without the slipcovers. 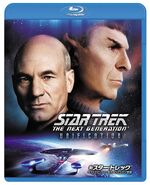 For the special "From One Generation to the Next", specials directors Robert Meyer Burnett and Roger Lay, Jr. were not able to secure the cooperation of Spock actor Leonard Nimoy, so they approached the "cross-over" aspect of Star Trek: The Original Series into Star Trek: The Next Generation, from another angle by having interviewees discuss the earlier cross-over episode "Sarek" from the third season, whose main guest character, Sarek (played by the late Mark Lenard) also appeared at the start of "Unification I". [4]