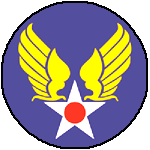 In July, 1947, the Air Forces retrieved a Ferengi shuttle which had crash landed in Roswell, New Mexico, after the shuttle had traveled back in time from the year 2372 via time warp. Air Forces general Rex Denning oversaw the interrogation of the vessel's three inhabitants, whom he believed to be alien invaders. The three Ferengi were eventually able to escape with the assistance of two helpful Humans, retrieve their ship, and return to their own time by recreating the time warp. The Air Forces subsequently covered up the incident, issuing an official statement claiming that only a weather balloon had been recovered in Roswell. (DS9: "Little Green Men")

While teleplay writers Ira Steven Behr and Robert Hewitt Wolfe consistently refer to the armed service as the "Army Air Corps", and to Denning as an "Army Air Corps general" in the script of "Little Green Men", both they and the Star Trek fact checker had overlooked that they had made a continuity error; the "United States Army Air Corps" (USAAC) had been renamed to "United States Army Air Forces" (USAAF, and plural to indicate the proliferation of specialized departments within the service) on 20 June 1941, six years prior to the events depicted in the episode. As the episode took place in "our" main timeline, the error could not be explained away after-the-fact as an alternate timeline event either. However, the USAAC designation was neither seen as script nor heard in dialog even once in the episode. Still, the wardrobe department of Star Trek had, unwittingly or not, paid closer attention to the script, as the uniforms of the US soldiers were endowed with the proper, time-period correct service emblems (the USAAC emblem lacked the birds/wings), and which were prominently featured in the episode.

As the original name already suggested, the service started out as a branch of the US Army, but was by the time of World War II already a full-fledged, independently operating military service onto its own. In order to reflect this, and already two months after the events depicted in "Little Green Men", the service was again renamed to "United States Air Force" (USAF, and singular to emphasize its separate status) on 18 September 1947, formally severing the ties with the army and, as of 2015, the name it currently still holds.

Retrieved from "https://memory-alpha.fandom.com/wiki/United_States_Army_Air_Forces?oldid=1798830"
Community content is available under CC-BY-NC unless otherwise noted.