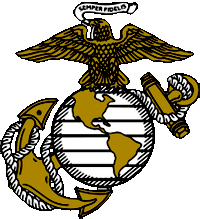 The United States Marine Corps was a military corps branch of the armed forces service of the United States of America, reporting to the US Department of the Navy. MARDET teams were generally assigned aboard large naval vessels. (Star Trek IV: The Voyage Home)

The Marines were used as naval infantry, specializing in fighting on ships and conducting amphibious assaults, and coordinated air/land/sea assaults.

In 2364, the Q-entity took the form of a 1980s Marine captain to lecture Jean-Luc Picard on the barbarity of Human history. (TNG: "Encounter at Farpoint")

Q's rank insignia were visible on his jacket, which appeared to be modern to the time the episode was filmed, in 1987.
The United States Marine Corps Air/Ground Combat Center in 29 Palms, California was given a "special thanks" credit in Star Trek III: The Search for Spock.