This Acamarian bodyguard came aboard the USS Enterprise-D in 2366 to guard Sovereign Marouk. He also accompanied her to Gamma Hromi II and Chorgan's Gatherer ship. (TNG: "The Vengeance Factor")

This Acamarian was played by background actor Clay Hodges who received no credit for this appearance.
In the script of the episode the guard is described as "standing unobtrusively behind Marouk" and as a "beefy male bodyguard".

Brull's sons were the male offspring of Gatherer Brull. One of the sons was about the age of Wesley Crusher in 2366 and was not good at mathematics. (TNG: "The Vengeance Factor")

This Acamarian Gatherer worked for the Gatherer leader Chorgan on his ship. He was present during the peace talks between Chorgan and Sovereign Marouk and was stunned by Commander Riker who stopped Yuta in killing Chorgan. (TNG: "The Vengeance Factor")

This gatherer was played by an unknown stunt performer.
The
Star Trek Customizable Card Game gives his name as Galnar.

Three civilians and two guards were seen on a picture in the Acamarian planetary database. This picture was shot in 2313 during the trial of Penthor-Mul and helped identify Yuta as the murderer. (TNG: "The Vengeance Factor")

The five unnamed Acamarians were portrayed by unknown performers on this picture.
The script describes that the Acamarian bystanders were "leaving the courthouse."

These four Gatherers were members of the clan on Gamma Hromi II along with Brull, Mallon, Temarek, and Volnoth.

In 2366 they fired with Regalian phaser rifles at the away team of the Enterprise-D. Later they were present when Sovereign Marouk joined the Gatherers at the campfire to talk about peace. (TNG: "The Vengeance Factor")

One of the Gatherers was played by Marina Sirtis' future husband Michael Lamper. According to the Star Trek: The Next Generation Companion, his character was named Mallon. Mallon was played by another actor, however.
The
Star Trek Customizable Card Game gives Michael Lamper's character's name as Dallan. 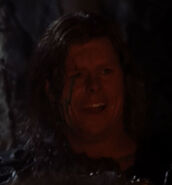 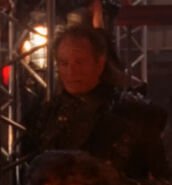 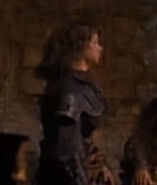 This Acamarian was played by an unknown actress.
She is described as a "middle-aged female maid" in the script of the episode.

Along with Yuta, four members of the clan Tralesta survived the Tralesta Massacre, the others being murdered. (TNG: "The Vengeance Factor")

These Acamarians were only mentioned in dialogue.
Retrieved from "https://memory-alpha.fandom.com/wiki/Unnamed_Acamarians?oldid=2398363"
Community content is available under CC-BY-NC unless otherwise noted.