The following is a list of unnamed Alpha and Beta Quadrant nebulae.

Located in the Alpha Quadrant, this nebula was an emission nebula in the Cardassian Union. It was notable for its size – it encompassed the entire Amleth system. The planet Rakal and the Loval system were located in the same sector as this nebula.

In 2372, Dukat suggested that K'Temang's next Cardassian target could be Amleth Prime. Major Kira Nerys pointed out that the nebula would render his Bird-of-Prey's cloaking device useless. (DS9: "Return to Grace")

This system's quadrant of origin is inferred based on the position of the Cardassian Union as seen in the star chart appearing in the Star Trek: Picard episode "Maps and Legends".
According to Star Trek: Star Charts (p. 46) and Stellar Cartography: The Starfleet Reference Library ("Federation Historical Highlights, 2161-2385"), this nebula was named the Amleth Nebula.

This nebula was used by Shran and his forces to hide from the Vulcans. (ENT: "Kir'Shara")

This nebula was seen in Cardassian space. An escape pod containg Jake Sisko, Nog, and Dorian Collins flew towards this nebula after the destruction of the Valiant. (DS9: "Valiant")

This distinct reddish brown nebula, resembling clouds and lighted by periodic flashes of light, was visited by USS Discovery during the period it was under the command of Christopher Pike. The ship cleared it while Pike and Michael Burnham discussed Spock's knowledge of the Red burst phenomenon. (DIS: "New Eden")

This dark matter nebula was located in Cardassian space and contained at least one planet.

In 2374, it was located near a ketracel-white facility destroyed by Captain Sisko. The ship Captain Sisko used was destroyed when it was attacked by two additional Jem'Hadar fighters that caused the already ship to crash on the planet within the nebula. Sisko and his crew, along with the Vorta Keevan eventually were rescued. (DS9: "A Time to Stand", "Rocks and Shoals")

According to the Star Trek: Star Charts (p. 46) and the Stellar Cartography: The Starfleet Reference Library ("Federation Historical Highlights, 2161-2385"), this uncharted dark matter nebula was located in the Alpha Quadrant.

The dark-matter nebula in 2374

A planet within the nebula
Add an image to this gallery

In 2371, Tom Riker took the USS Defiant into a nebula to hide the ship from Cardassian warships after Kira Nerys sabotaged the cloaking device. (DS9: "Defiant")

Captain Ransom once hid from a Klingon Bird-of-Prey for three days in a nebula near Epsilon IV. (VOY: "Equinox, Part II")

This nebula located in Federation space was traversed by the USS Enterprise-E in 2373, shortly before it was assigned to patrol the Romulan Neutral Zone after the Borg sent a cube to Earth. (Star Trek: First Contact)

This nebula, located in the Delphic Expanse, contained a the terminus of a subspace corridor and was controlled by the Kovaalans. In 2154, Enterprise attempted to access the subspace corridor within the nebula to rendezvous with Degra, but was forced to fight with the Kovaalan starships in the nebula. While Enterprise managed to escape, the damage inflicted on its impulse manifold caused it to emerge in 2037 when it came out of the other terminus of the corridor. Enterprise remained in the expanse for the following 117 years, until it encountered the past version of itself. This Enterprise helped its past counterpart reach the corridor without traveling to the early 21st century. Instead, it rendezvous with Degra's ship early, thus negating the alternate version of the past in which it time traveled. (ENT: "E²") 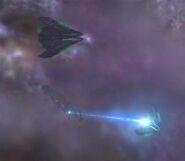 The alternate Enterprise fights with the Kovaalans

Enterprise enters the subspace corridor
Add an image to this gallery

In 2374, a Dominion fleet gathered near this nebula to counter Operation Return. (DS9: "Favor the Bold")

Some time after Spock fled Starbase 5, USS Discovery followed Spock's shuttle, by then piloted by a section 31 operative into a red nebula containing hydrogen. (DIS: "Saints of Imperfection")

The nebula could be in the Mutara sector, as that is where Spock's shuttle was said to have disappeared in "Light and Shadows", though the nebula does not look particularly like the sector's infamous Mutara Nebula.

This deep red nebula was located near Paraagan II and contained a Suliban helix.

In 2152, the Cabal captured Enterprise and took it to this nebula after the Cabal destroyed mining colony on Paraagan II. After Enterprise faked a warp core breach, the Suliban towed the ship out of the nebula and it escaped. (ENT: "Shockwave, Part II")

According to the Star Trek: Star Charts, this nebula was named FGC-883. It was located in the Beta Quadrant.
Retrieved from "https://memory-alpha.fandom.com/wiki/Unnamed_Alpha_and_Beta_Quadrant_nebulae?oldid=2750083"
Community content is available under CC-BY-NC unless otherwise noted.