This planetoid was located in the unnamed star system near Azati Prime, further out from the star compared with the planet and the detection grid protecting it. It also had a single moon.

Enterprise attempted to hide behind the planetoid to avoid detection by Xindi forces in the system in February of 2154, but was unaware of the fact that there was a listening post on the moon below, staffed by three Xindi. Enterprise destroyed the outpost before it could send a message to the planet, but the lack of a report from the outpost alerted Commander Dolim of Enterprise's presence anyway. (ENT: "Azati Prime")

The way the moon was brought up without explanation very abruptly and its surface had a similar texture as the planetoid Enterprise had been shown orbiting, a Homeric nod might actually have occurred where the writers mistakenly referred to the same body as both a planetoid and later a moon.

The diplomacy scenario 12-alpha revolved around the mining rights for a planetoid in Nausicaan space. (VOY: "Q2")

This planetoid was only mentioned in dialogue. 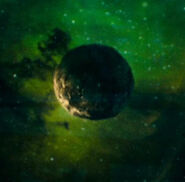 View from the bridge of the Enterprise

An aerial view of the surface

In an alternate 2259, this planetoid, with a breathable atmosphere, was used by Carol Marcus and Leonard McCoy to open up an advanced long-range torpedo without endangering the USS Enterprise. (Star Trek Into Darkness)

Located in the Badlands, the Terikof belt contained several class M planetoids. In 2371, they were theorized by Tom Paris to be a possible destination of the missing ship Val Jean. (VOY: "Caretaker")

These planetoids were only mentioned in dialogue.
日本語 Nederlands
Community content is available under CC-BY-NC unless otherwise noted.