The following is a list of unnamed Borg spheres.

In 2368, this sphere crashed onto Planet 1865-Alpha in the Delta Quadrant. Only five drones survived the crash, Two of Nine, Three of Nine, Four of Nine, Seven of Nine, and a fifth drone whom Seven encountered and died in her arms. The drones had to abandon the sphere, because the transwarp chamber exploded. (VOY: "Survival Instinct")

This sphere was a long-range tactical vessel. It had transwarp capability and Ablative hull armor.

In 2375, a transporter accident created a 29th century Borg drone, One. His proximity transceiver contacted a Borg sphere, which intercepted the USS Voyager near a proto-nebula. After initial attempts to fight the sphere failed, One beamed aboard the Borg ship, and navigated it into the nebula. The high pressure inside the nebula caused the sphere to be destroyed. (VOY: "Drone")

According to Decipher's Starships sourcebook, this sphere was called Designate 196. 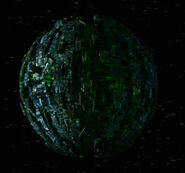 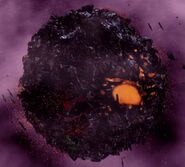 In 2375 the USS Voyager destroyed a Borg probe and salvaged a data node from the wreckage. The node contained tactical information about vessel movements in a radius of thirty light years. One ship was a damaged sphere which could only travel at warp 2 due to its encounter with an ion storm. Captain Kathryn Janeway decided to raid the sphere to obtain a transwarp coil, as part of Operation Fort Knox. The attempt was successful, but Seven of Nine was forced to remain on the ship because the Borg Queen had threatened her that she would assimilate Voyager if she didn't comply. The sphere used its remaining transwarp coil to travel back to the Unicomplex and bring Seven to the Queen. (VOY: "Dark Frontier")

In 2376, this Borg sphere attacked the Voyager, after being attracted by a false warp signature emitted by a Brunali transport vessel. It tried to assimilate both vessels, but Seven of Nine came up with a plan and beamed a photon torpedo on the Brunali vessel, as it was pulled inside the sphere. The explosion heavily damaged the sphere, giving Voyager the chance to escape. (VOY: "Child's Play")