The male Boslic was played by Max Freeman.

The Boslic crewmembers served on a freighter that, when arriving at Deep Space 9, was inspected Kurn, who was a part of Odo's Bajoran security detail. (DS9: "Sons of Mogh") 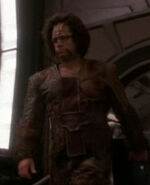 played by an unknown actor
Add an image to this gallery

This female Boslic was in the audience of several Tsunkatse matches near the Norcadian homeworld in the Delta Quadrant in 2376. (VOY: "Tsunkatse")

This Boslic was played by an unknown actress.

This Boslic woman was in a bar on Dessica II sitting next to a Nausicaan at the same time the crew of the USS Enterprise-D went undercover on the planet to search for their missing captain, Jean-Luc Picard in early 2370. (TNG: "Gambit, Part I")

This woman was played by an unknown actress.
Retrieved from "https://memory-alpha.fandom.com/wiki/Unnamed_Boslics?oldid=2235500"
Community content is available under CC-BY-NC unless otherwise noted.