These two Breen served as aides and guards for Thot Gor in 2375. They were present when the Female Changeling decided to retake the Chin'toka system and during the second Battle of Chin'toka. They also witnessed the subspace transmition from Damar revealing the Cardassian rebellion. (DS9: "The Changing Face of Evil")

Both Breen were played by background actors who received no credit for their appearance.
The
Star Trek Customizable Card Game gives the first Breen's name as Lam. 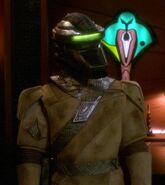 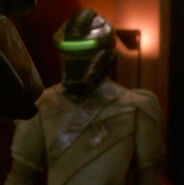 These guards served on a Breen warship and guarded Ezri Dax and Worf, both held as prisoners. They interrogated them separated from each other and transported them later onto another ship as a gift for the Female Changeling. (DS9: "'Til Death Do Us Part", "Strange Bedfellows")

These Breen were played by stunt and background performers who received no credit for their appearance.
One of the Breen was played by regular background actor Wade Kelley. 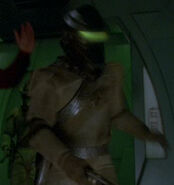 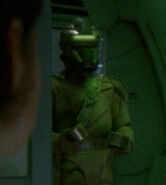 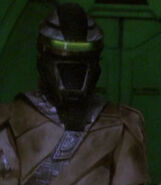 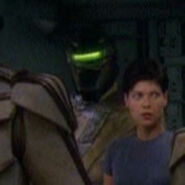 Eight guards manned a dilithium mine where the survivors of the Ravinok were used as slave labor on Dozaria. Kira Nerys and Dukat freed the survivors in their rescue of Tora Ziyal, Dukat's daughter. All eight were either killed or incapacitated. (DS9: "Indiscretion")

The Breen Guards were played by unknown actors.

Allegedly, the Ferengi were attempting to bribe a Breen pilot to throw the 2370 palio at Deep Space 3. (TNG: "Interface")

This soldier attended the signing of the treaty that ending the Dominion War. (DS9: "What You Leave Behind")

This Breen was played by an unknown actor.
Retrieved from "https://memory-alpha.fandom.com/wiki/Unnamed_Breen?oldid=2398567"
Community content is available under CC-BY-NC unless otherwise noted.