This admiral was played by an unknown actor.
The Starfleet Operations Manual from Decipher gives his name as S'rrel (β).

This female child was sold as a slave to the Tars Lamora prison colony by a Kazon trader in 2383. After the escape of the USS Protostar, she was put to work in the mines. (PRO: "Lost and Found", "Starstruck") Upon the Protostar's return to Tars Lamora that same year, she was seemingly intrigued by the vessel's presence, and went to investigate. (PRO: "A Moral Star, Part 1") She was later encountered by Dal R'El and Zero, both of whom managed to turn her and the other slaves' ankle monitors into universal translators. She then took part in a coup to overthrow Drednok, whom she ultimately decapitated using her claws. (PRO: "A Moral Star, Part 2")

This child was voiced by Rania Sharkawy in "A Moral Star, Part 2", while her vocal effects were provided by Dee Bradley Baker in "Lost and Found".

This commodore was played by an unknown actor.

In 2381, this male worked on Qualor II at a storage facility where Dr. T'Ana's libido post was held.

He was a huge fan of Klingon acid punk music, and had even seen the rock band Gik'Tal perform at a concert on Akstin. (LD: "We'll Always Have Tom Paris")

This acid punker was voiced by Paul Scheer.

This couple was walking along the streets of Qualor II near Quark's Bar during Ensigns Beckett Mariner and D'Vana Tendi's visit to that planet in 2381. (LD: "We'll Always Have Tom Paris") 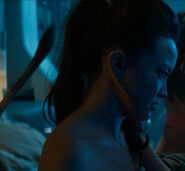 In the alternate reality, James T. Kirk slept with a pair of female twins in 2259. (Star Trek Into Darkness)

These twins were played by real life twins Katie and Kellie Cockrell.
Concept designer Mauricio Ruiz created a large variety of alien make up designs for the twins. [1]
Damon Lindelof confirmed that they were Caitians in an interview with StarTrek.com. [2]
Deutsch Italiano 日本語
Community content is available under CC-BY-NC unless otherwise noted.
Advertisement