An unknown number of Changelings infiltrated the population of Earth in 2372.

A Changeling was hidden at the room where the Antwerp Conference was taking place, and was believed to be responsible for the bombing of the conference. It was determined by Starfleet that this Changeling had most likely survived the attack.

Another Changeling, imitating Admiral Leyton, was exposed by Odo. When they met the Changeling, Leyton was rude to Odo and kept commenting on Odo's ability to assume different shapes. Odo, sensing something was wrong, extended his hand to shake with Leyton; when he refused, Odo grabbed him, and they linked, exposing the Changeling. (DS9: "Homefront")

Shortly after this encounter, another Changeling, or possibly the same, startled Benjamin Sisko when he appeared to him in Miles O'Brien's form, explaining to him their strategy of creating distrust among Humans and claiming that only four Changelings were at the time operating on Earth. He told him that if a few Changelings could cause so much panic, think what an invasion would do. (DS9: "Paradise Lost")

A Changeling at the Antwerp Conference moments before the bombing

A Changeling posing as Admiral Leyton

The infant Changeling in a glass cylinder

A dying infant Changeling was acquired by Quark from a Yridian he had dealings with, and was in turn sold to the Human Odo in 2373. When Dr. Bashir was able to save it, it was cared for and investigated by Odo, who saw it as an opportunity to reconnect with his people.

He attempted to teach it to shape shift using basic encouragement, rather than the more painful electric jolts that had been used on him, but his initial attempts failed. When Dr. Mora, who had raised Odo, arrived on the station, Odo was not pleased. He was still resentful of the invasive procedures Mora had used on him. They immediately clashed over the raising of the infant, but, as Odo was making little progress with the infant, and Starfleet was threatening to take the infant, Odo accepted Mora's help. Both of them bonded as the Changeling began to take shape, realizing the advantages in the other's methods; it only began to shape-shift because of Mora's electric shock methods, but because Odo had made an effort to talk to it, it showed an interest in him, forming a face with eyes to peer at him.

However, it became sick again, and, despite the efforts of Doctor Bashir, it eventually died. However, as thanks for what Odo had tried to do for it, the Changeling merged into Odo, causing him to regain his shapeshifting abilities. (DS9: "The Begotten")

It possible that, like Odo and Laas, the infant Changeling was one of the Hundred Changelings.

The costume worn by Tami Peterson was later sold off on the It's A Wrap! sale and auction on eBay. [1] 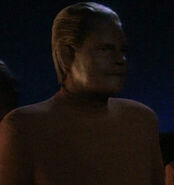 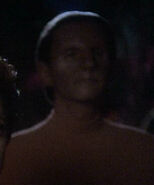 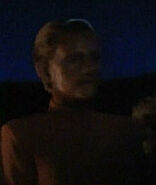 Played by Tami Peterson
Add an image to this gallery

This Changeling was aboard a Jem'Hadar fighter which crashed on Torga IV in the Gamma Quadrant in 2373. The Changeling suffered severe physical trauma due to a failure of the inertial damper systems prior to the crash, which had killed the ship's Jem'Hadar and Vorta crew.

When the ship was discovered by a Starfleet crew led by Captain Benjamin Sisko that had been conducting a mineral survey on the planet, the Changeling disguised itself as a console inside the ship. When another Jem'Hadar unit, commanded by the Vorta Kilana, arrived to secure the Changeling's rescue, they were unwilling to fire weapons near or within the ship to avoid harming the Changeling. Kilana was also unwilling to tell Sisko the true nature of her mission out of the mistaken fear that the Starfleet crew might kill the Changeling or use it as a hostage.

After several hours of holding its shape, the Changeling succumbed to its injuries and died. Out of shame for having allowed one of their gods to die, the Jem'Hadar committed suicide. Unable to stop Sisko from taking the ship, Kilana requested, and was granted, permission to remove a portion of the Changeling's desiccated remains to take back to the Dominion. (DS9: "The Ship")

This individual was created by CGI.
Retrieved from "https://memory-alpha.fandom.com/wiki/Unnamed_Changelings?oldid=2473254"
Community content is available under CC-BY-NC unless otherwise noted.