This ambassador represented Coridan's government at Coalition of Planets meetings held in San Francisco on Earth in January 2155. During the meetings, the ambassador complained to Human Minister Nathan Samuels regarding the Tellarites having requested an embargo. Although the Tellarite government claimed the embargo would be a result of Orion attacks on their freighters, the Coridanite ambassador denounced such claims as "Tellarite slander", believing that Coridan, having traded with the Orions for centuries, would have known of the attacks and that the Tellarites were merely attempting to deprive Coridan of commerce. The ambassador's discussion with Samuels was interrupted by Captain Jonathan Archer, and after a brief introduction, the ambassador excused himself to contact his government. (ENT: "Demons")

The ambassador was played by Tom Bergeron. He was called "Lekev" in the non-canon "relaunch" novel The Good That Men Do. The ambassador's differing appearance to previously established Coridanites was explained as being due to the use of an elaborate ceremonial mask.

These brothers of Kal attempted to defend their settlement from attack. (DIS: "Far From Home")

These kids were the children of the bartender Os'ir, who lived on "the Colony", in the 32nd century. (DIS: "Far From Home")

These kids were only mentioned in dialogue.

These rebels served under Traeg and were members of a faction on the planet Coridan. In 2151, they kidnapped Captain Archer and Sub-Commander T'Pol, who were en route to meet Chancellor Kalev.

The rebels were later attacked by Lieutenant Reed and Commander Tucker, who had help from the Andorians Shran and Tholos. (ENT: "Shadows of P'Jem")

All rebels were played by stunt and background performers who received no on-screen credit for their appearance. McCann's costume was sold off on the It's A Wrap! sale and auction on eBay. [1] 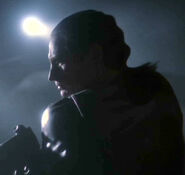 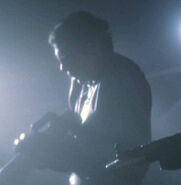 In the first draft script of "Shadows of P'Jem" (written while the episode had the working title "Untitled Andorians Return"), a Coridanite "city engineer" was referred to, in dialogue, as having extended a personal invitation for Commander Tucker to visit Coridan. The same script also made reference to a Coridan army, under the leadership of Chancellor Kalev.