In late 2373, at least two of these starships belonged to the Second Fleet.

Recapture of the USS Prometheus Edit

In 2374, these two starships' escorted an Akira-class starship into battle with the USS Prometheus, the T'Met and two other Romulan D'deridex-class warbirds.

During the battle one of the ships was damaged by a misguided photon torpedo that was fired from the Prometheus. (VOY: "Message in a Bottle") 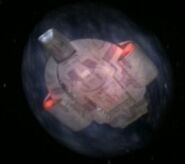 In mid-2378, these two starships stationed near the Sol system were dispatched by Admiral Owen Paris to a defensive point near an opening Borg transwarp aperture near Earth.

The ships opened fire on the emerging Borg sphere and assisted in its destruction. Following the emergence of the USS Voyager from the debris, the unnamed Defiant-class starships assisted in escorting Voyager back to Earth. (VOY: "Endgame")